DUBAI, United Arab Emirates (AP) — Dubai-based port operator DP World said Wednesday it would partner with an Israeli firm in a bid to take over the country's Haifa port, the largest shipping hub...

MEXICO CITY (AP) — Mexican President Andrés Manuel López Obrador said Tuesday he will ask the Senate to schedule a referendum on whether to investigate and possibly bring charges against his...

Mexico graft case: Ferrari for the president, bags of cash

MEXICO CITY (AP) — The alleged examples of kickbacks, bribes and graft contained in leaked accusations by a former Mexican official contain some of the oddest, most banal and most colorful...

ATHENS, Greece (AP) — Greece’s prime minister on Friday declared the start of preliminary work on a long-delayed major development project at the prime seaside site of the old Athens...

JACKSONVILLE, Fla. (AP) — The board of directors of a city-owned utility in Florida has pulled the plug on a privatization plan, even though the process has cost taxpayers $10 million.

PHOENIX (AP) — A lawmaker has proposed ending Arizona’s practice of hiring private companies to provide health care for its 34,000 prison inmates and instead turning that duty back to the state....

WASHINGTON (AP) — Eager for changes at the Department of Veterans Affairs, President Donald Trump toyed early on with issuing an executive order to close parts of the VA health system without...

DES MOINES, Iowa (AP) — An insurance company that pulled out of the Iowa Medicaid program nearly two years ago still has unpaid bills of as much as $1.4 million owed to Iowa hospitals, nursing...

FRANKFORT, Ky. (AP) — A group formed by the legislature to study the feasibility of privatizing foster care says Kentucky should focus on strengthening the system it already has.

TEGUCIGALPA, Honduras (AP) — Legislators in Honduras have struck down laws that could have privatized some health and education services, after protests left some government offices burned and...

DES MOINES, Iowa (AP) — Two Democratic senators have proposed a bill that would return thousands of Iowans living with severe, complex and permanent disabilities back to a state-managed Medicaid program and make other changes to the program privatized three years ago.

RALEIGH, N.C. (AP) — The North Carolina legislature is weighing anew whether changing how liquor sales have been regulated for decades is worth boosting the number of retail outlets selling spirits with what critics call the risks of increased alcohol consumption.

Mexico gets leftist leader after decades of technocrats

MEXICO CITY (AP) — Andres Manuel Lopez Obrador took the oath of office Saturday as Mexico's first leftist president in over 70 years, marking a turning point in one of the world's most radical experiments in opening markets and privatization.

In his first speech to Congress, Lopez Obrador pledged "a peaceful and orderly transition, but one that is deep and radical ... because we will end the corruption and impunity that prevent Mexico's rebirth."

CALUMET PARK, Ill. (AP) — Calumet Park officials have hired a private firm to provide fire and ambulance services to spare a tight budget, in a move the village attorney says could become the norm in Chicago's south suburbs.

Brazil’s Petrobras to be led by privatization advocate

Castello Branco, a former member of Petrobras' board, has advocated privatizing the oil giant, a measure also supported by his close ally and long-time friend Paulo Guedes, designated as Brazil's next finance minister.

Iowa candidates for governor face off in first debate

ANKENY, Iowa (AP) — Iowa Gov. Kim Reynolds and Democratic challenger Fred Hubbell traded barbs Wednesday over the state budget and privatization of the Medicaid program as they met on a debate stage for the first time. 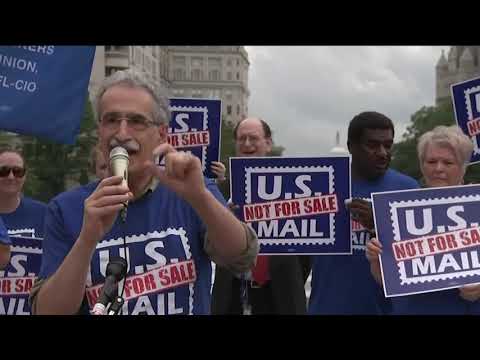 Leslie Maxwell-Burton was among the Reno protesters who waved signs Monday at the federal building just south of the downtown casino district. She told KOLO-TV she fears privatization would cost her her job.

A look at the campaign proposals made by Brazil’s Bolsonaro

RIO DE JANEIRO (AP) — Far-right congressman Jair Bolsonaro won the first round of Brazil's presidential race Sunday, doing far better than polls predicted and coming just shy of an outright victory. In the weeks ahead of an Oct. 28 runoff against former Sao Paulo mayor Fernando Haddad, Bolsonaro's main proposals are sure to come under much scrutiny.

Here is a look at what Bolsonaro has promised to do if elected.

A look at the election proposals made by Brazil’s Bolsonaro

RIO DE JANEIRO (AP) — Far-right congressman Jair Bolsonaro won the first round of Brazil's presidential race Sunday, doing far better than polls predicted and coming just shy of an outright victory. In the weeks ahead of an Oct. 28 runoff against former Sao Paulo mayor Fernando Haddad, Bolsonaro's main proposals are sure to come under much scrutiny.

Here is a look at what Bolsonaro has promised to do if elected.

DES MOINES, Iowa (AP) — An outspoken critic of Iowa's Medicaid privatization process says he has been removed as a chairman of a state council that monitors the state's shift to private management of its $5 billion Medicaid program.

Puerto Rico reaches deal to restructure $3B of power debt

SAN JUAN, Puerto Rico (AP) — Puerto Rico's government reached a deal Monday night with a bondholder group to restructure more than a third of the debt owed by its troubled power company as the utility moves toward privatization.

A federal control board overseeing the U.S. territory's finances called it an "important milestone" and promised the deal would not hit Puerto Ricans with rate increases to cover debt service if there was a drop in power usage.

SAO PAULO (AP) — Brazil's jailed former President Luiz Inacio Lula da Silva pledged on Friday to block or undo privatizations if he is returned to the office he held from 2003 to 2010.

Da Silva will likely be barred from running for the presidency again by Brazil's electoral court, but his statements are seen as the program of his left-leaning Workers' Party ahead of October's elections.

SAN JUAN, Puerto Rico (AP) — Federal lawmakers demanded Wednesday that Puerto Rico quickly privatize its bankrupt power company in a bid to end its turmoil and allow others to provide stable electricity in the aftermath of Hurricane Maria.

Frustration grew as consultants and local and federal officials testified during a hearing on the management crisis at Puerto Rico's Electric Power Authority held by the U.S. House Committee on Natural Resources in Washington.

CHESTERTON, Ind. (AP) — A years-long effort to redevelop a historic pavilion at Indiana Dunes State Park faces another hurdle after National Park Service officials said "problematic" design changes will require them to conduct another review of the privatization project.

National parks officials said in a July 12 letter that updates to the plans made last August appear to improperly reduce public access throughout the building.

SAN JUAN, Puerto Rico (AP) — The CEO of Puerto Rico's bankrupt power company resigned on Wednesday just months after he was chosen to oversee its privatization as the U.S. territory struggles to restore electricity to the last of those who remain in the dark nearly 10 months after Hurricane Maria.

The resignation of Walter Higgins adds to challenges for a company that is $9 billion in debt and has seen a turnover of leaders since the Category 4 storm hit Puerto Rico.

VALPARAISO, Ind. (AP) — A special prosecutor will investigate allegations that a developer moved forward with a construction project at Indiana Dunes State Park without a permit.

WASHINGTON (AP) — President Donald Trump's pick to be Veterans Affairs secretary is promising not to privatize the agency, a key Democratic senator said Tuesday, taking a stance on a politically charged issue that his predecessor says led to his firing.

ATHENS, Greece (AP) — Owners of the newly-privatized port of Thessaloniki, in Greece's second-largest city, say they will need to spend an additional 27 million euros ($33.4 million) on unforeseen equipment repairs and upgrades, arguing that facilities were in far worse condition than described by the previous, state-appointed management.

WASHINGTON (AP) — Former Veterans Affairs Secretary David Shulkin is blaming his sudden ouster from the Trump administration on "political forces" that he says are bent on privatizing the agency and putting "companies with profits" over the care of veterans.

The doctor is in: White House physician nominated to lead VA

A Navy rear admiral, Jackson is a surprise choice to succeed Shulkin, a former Obama administration official and the first nonveteran to head the VA. Trump had been considering replacing Shulkin for weeks but had not been known to be considering Jackson for the role.

ATHENS, Greece (AP) — Greece's supreme court has approved a large private urban development project on the prime seaside site of the old Athens airport, which is a key element of the country's bailout program.

The decision made public Thursday says that the development at Hellenikon is in accordance with Greece's constitution and laws, but stressed that it must strictly adhere to environmental and building regulations.

The agency said Tuesday that investors must submit their offers by March 15.

Under its international bailout agreements, Greece is committed to sell off swathes of state-owned companies and real estate.

SAN JUAN, Puerto Rico (AP) — Government officials on Monday denied claims they plan to eliminate the Energy Commission that regulates Puerto Rico's power company amid plans to privatize the utility, which they have warned will run out of funds by mid-February.

SAN JUAN, Puerto Rico (AP) — One of the largest public utilities in the U.S. might soon be up for sale, but many wonder who would want to buy a power company that is worth roughly half of the $9 billion debt it holds and has an infrastructure nearly three times older than the industry average.

DES MOINES, Iowa (AP) — Iowa's shift to privately-managed Medicaid will save the state 80 percent less money this year than originally predicted, according to a new state estimate.

SAO PAULO (AP) — Brazil auctioned off the rights to develop deep water oilfields on Friday after the eagerly anticipated bidding was nearly called off by a judicial decision.

The auction marks the first time Brazil will give private and foreign companies the chance to operate pre-salt reserves themselves, part of President Michel Temer's push to increase privatization and attract more international investment. Previously, state-run Petrobras needed to have at least a 30 percent stake.

INDIANAPOLIS (AP) — Activists opposed to the privatization of a pavilion at Indiana Dunes State Park want officials to review a developer's renovation plans, arguing they would improperly alter the historic building.

Public Employees for Environmental Responsibility and Dunes Action made the joint request in a complaint filed Thursday. It was sent to state and federal historic preservation officials and is just the latest in a long series of attempts to stymie the project.

WICHITA, Kan. (AP) — The head of Kansas' state employees union and a local lawmaker say a push by Gov. Sam Brownback's administration to privatize state office space left employees vulnerable during a shooting this week at a Department of Revenue office in Wichita.

ATHENS, Greece (AP) — Greece has agreed to sell its railways company to Italy's own state-owned operator for 45 million euros ($54 million) as part of its privatization drive.

Harwell: No privatization of Tennessee park services as gov

The Chattanooga Times Free Press reports that Harwell's position is at odds with term-limited Gov. Bill Haslam's longtime pursuit of outsourcing more functions at the parks.

TOPEKA, Kan. (AP) — A private company that has bid to rebuild and run the troubled Osawatomie State Hospital is proposing a replacement facility with 210 beds that would cost between $100 million and $175 million, the secretary of the Kansas Department for Aging and Disability Services said Wednesday.

KANSAS CITY, Mo. (AP) — A shooting that killed an off-duty police officer in Kansas City's Westport bar and entertainment district has renewed the push among business owners to privatize stretches of two streets.