NEW YORK (AP) — Fans remembered John Lennon with flowers, candles and songs Tuesday, the 40th anniversary of the former Beatle's death after being shot outside his New York City apartment...

By The Associated PressSeptember 4, 2020 GMT

The year the music might die: British clubs face closure

LONDON (AP) — When Keiron Marshall was 15, he found his way out of a desperate situation with help from an unexpected source: Eric Clapton. The guitar great was host at the first gig Marshall ever...

Jon Anderson started making “1000 Hands” nearly 30 years ago before setting it aside. Its title alludes to the lengthy and impressive roster of...

Astrid Kirchherr, photographer of the Beatles, dead at 81

NEW YORK (AP) — Astrid Kirchherr, the German photographer who shot some of the earliest and most striking images of the Beatles and helped shape their trend-setting visual style, has died at age...

Blake Zidell, a representative for Willner, said the producer died...

SANTA FE, N.M. (AP) — The Santa Fe Opera is collaborating with other venues and opening up its stage to other performers as a means to build up its bottom line.

With enviable energy and the simple, persistent message of "peace and love," Ringo Starr has become one of humanity's quintessential goodwill ambassadors....

DETROIT (AP) — Don Was has performed with or produced many musical legends, including Bob Dylan, Mavis Staples, the Rolling Stones and Ringo Starr. But the Detroit-raised sonic craftsman feels...

Celebrity birthdays for the week of July 7-13

Celebrity birthdays for the week of July 7-13:

The Latest: Reaction to the death of a ‘night tripper’

NEW ORLEANS (AP) — The Latest on the death of Mac Rebennack, the New Orleans musician better known as Dr. John (all times local):

Paul McCartney tells fans: Don’t be like me and eat too much

LONDON (AP) — Paul McCartney's Christmas message to his fans around the world: Don't be like me and eat and drink too much.

He says "don't eat and drink too much! I know I will, but that's no excuse for you" before wishing everyone a good holiday.

NEW YORK (AP) — Beneath sparkling chandeliers hanging in the famed Rainbow Room, as a gala crowd dotted with rock stars sat around white-clothed dinner tables, Ringo Starr stood at a podium and described what it felt like to be 30 years sober.

With wife Barbara Bach Starkey — herself a recovering alcoholic — at his side, the former Beatle described what it took for him to get help and called for more resources and acceptance for the treatment movement that saved their lives. 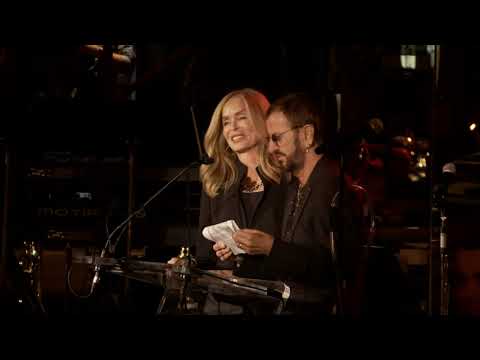 NEW YORK (AP) — Joe and Marjorie Walsh were honored Monday night by the nonprofit Facing Addiction with NCADD for their support of the recovery movement and their efforts to raise awareness about drug and alcohol abuse.

NEW YORK (AP) — Giles Martin says his father, producer George Martin, would wince whenever a fan would say that the "White Album" was their favorite Beatles' record.

The late George Martin would recall how tough it was to make the sprawling double album, titled "The Beatles" but given its familiar nickname because of the all-white cover. His son is in charge of a 50th anniversary repackaging that is due out Nov. 9. 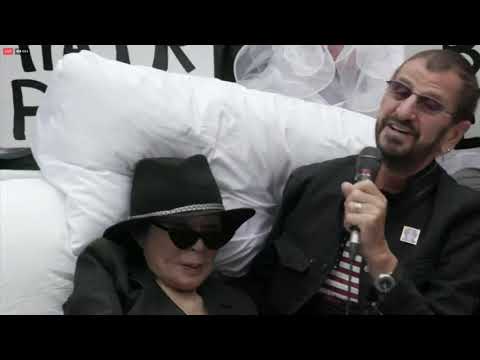 NEW YORK (AP) — It's the season for Beatles in New York City.

Within a week of Paul McCartney playing a surprise show at Grand Central Station, Ringo Starr followed a more old-fashioned path Thursday night. The drummer and singer headlined a two-hour show at Radio City Music Hall, with thousands spending much of the performance standing and cheering along.

"We love you, Ringo!" one fan called out, and Starr shouted greetings in kind.

The Beatles’ ‘All You Need Is Love’ adapted for picture book

Simon & Schuster Children's Publishing announced Thursday that the series will begin with "All You Need Is Love," featuring illustrations by Marc Rosenthal. It comes out in January through the imprint Little Simon. The second book will be announced at a future date.

Today in History for July 7th

Rock trio The Record Company is back but not much changed

NEW YORK (AP) — Nowhere is there a better sign of how far the rock trio The Record Company has come than in the difference between where the group recorded its first and second albums.

The trio made its debut in the bassist's unassuming living room in Los Feliz, a hillside neighborhood near Hollywood. The band had to contend with barking dogs, neighbors unhappy with the sound of crashing cymbals and even the mailman's daily interruption.

The shows join an entertainment schedule that already includes Britney Spears, who is booked for three sold-out shows July 19-21.

The casino is also adding a second show with ex-Beatles drummer Ringo Starr on June 1.

LONDON (AP) — Paul McCartney paid tribute to his parents after a ceremony making him a Companion of Honor at Buckingham Palace.

The former Beatle was joined by wife Nancy Shevell at the Friday ceremony on a sparkling spring day.

He said in a written statement that he saw the award "as a huge honor for me and my family and I think of how proud my Liverpool mum and dad would have been to see this."

LONDON (AP) — Call him Sir Ringo now, or Sir Richard to be more precise. Either way, it's a fitting honor for the former Beatles drummer, who has waited decades for the recognition.

The 77-year-old Ringo Starr received his long-awaited knighthood from Prince William Tuesday. He used his real name Richard Starkey for the big event.

He said the honor "means a lot". It comes more than half a century after the youthful Beatles first went to Buckingham Palace to receive MBE awards.

LONDON (AP) — Paul McCartney and George Harrison's widow and son have publicly remembered the late Beatle on what would have been his 75th birthday.

"Happy Birthday Georgie. Wonderful memories," McCartney tweeted Sunday along with a black and white photograph of the two of them taken during the Beatlemania days.

LONDON (AP) — A Beatle and a Bee Gee are among the celebrated citizens who have been selected for knighthood and other awards given in the name of Britain's monarch.

Britain's Cabinet Office publishes a list of the people receiving honors for merit, service or bravery twice a year: just before New Year's Eve, and on the Saturday in June when Queen Elizabeth II's birthday is officially observed.

We're on the road again with the skiffle band king, Ringo Starr. The busiest of all Beatles is out with his 19th solo album, "Give More Love," featuring a who's-who of rock greats as supporting cast.

Today in History for July 7th

NEW YORK (AP) — SiriusXM satellite radio said Tuesday it will debut a channel devoted to the Beatles later this month, achieving a long-sought dream to highlight the music of the pop legends.

The Beatles Channel launches May 18, a week before the band's newest archival project is released: a box set keyed to the 50th anniversary of "Sgt. Pepper's Lonely Hearts Club Band."

RALEIGH, N.C. (AP) — Despite Republican assurances that North Carolina's "bathroom bill" isn't hurting the economy, the law limiting LGBT protections will cost the state more than $3.76 billion in lost business over a dozen years, according to an Associated Press analysis.

The state's tourism industry generated $44.1 billion in spending in 2016, an increase of nearly 3 percent over the previous year, and 98 million people visited New Jersey last year, an increase of 3 percent, Lt. Gov. Kim Guadagno said at a tourism conference Thursday in Atlantic City.

TULSA, Okla. (AP) — Public memorial services are planned in Tennessee and Oklahoma for Rock and Roll Hall of Famer Leon Russell, who died Sunday at the age of 74.

Bond Memorial Chapel says a funeral will be held Friday at Victory Baptist Church in Mt. Juliet, Tennessee, then another service will be held Sunday at the Oral Roberts University Mabee Center in Tulsa. The Oklahoma native died in his sleep Sunday.

NASHVILLE, Tenn. (AP) — Leon Russell, who performed, sang and produced some of rock 'n' roll's top records, has died. He was 74.

Russell's wife, Jan Bridges, said in a statement that her husband died in his sleep Sunday at their Nashville home. She said Russell had heart bypass surgery in July and had been planning on resuming touring in January.

NEW YORK (AP) — Colombian singer-songwriter Fonseca wrote and recorded a verse in Spanish for a new version of Ringo Starr's peace anthem "Now The Time Has Come," at the request of the ex-Beatle.

He had a single day to do it.

The four-time Latin Grammy winner was contacted Wednesday by Starr's team and put himself to work immediately: The song will be released Friday in honor or the recently reached Colombian peace treaty.