NEW YORK (AP) — Rose McGowan doesn't plan be in the courtroom when Harvey Weinstein's criminal trial starts next week: One of Weinstein's most prominent accusers, McGowan says the trauma the...

NEW YORK (AP) — Rose McGowan's tweet that apologized on behalf of the U.S. to Iran for “disrespecting their flag and people” in the wake of an airstrike that killed the country's top general was...

LOS ANGELES (AP) — Actress Rose McGowan filed a federal lawsuit Wednesday alleging that Harvey Weinstein and two of his former attorneys engaged in racketeering to silence her and derail her...

NEW YORK (AP) — A new book by The New York Times reporters who uncovered sexual misconduct accusations against Harvey Weinstein reveals the identities of some of the whistleblowers who aided their... 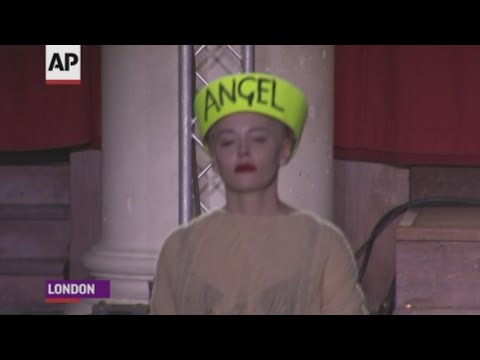 Weinstein's four new lawyers all have experience defending high-profile clients, including Casey Anthony, former sports stars Aaron Hernandez and Kobe Bryant and, in a strange twist, one of Weinstein's own Hollywood accusers. 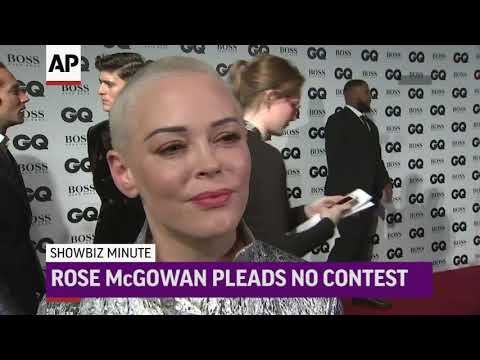 FALLS CHURCH, Va. (AP) — Actress Rose McGowan pleaded no contest Monday to a misdemeanor drug charge in Virginia after cocaine was found in a wallet she left behind at Dulles International Airport two years ago.

Rose McGowan to plead no contest to reduced drug charge

LEESBURG, Va. (AP) — A lawyer for Rose McGowan says the actress and activist will plead no contest to a reduced drug charge in Virginia and avoid jail time.

McGowan: MeToo is ‘not a bunch of people with pitchforks’ 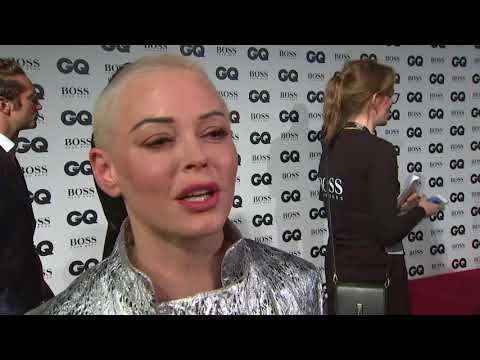 Rose McGowan to go on trial in January on cocaine charge

LEESBURG, Va. (AP) — Actress and activist Rose McGowan will stand trial in January on a charge of felony cocaine possession in Virginia.

News outlets report McGowan's trial was set on Tuesday, a day after she was indicted. She'll be tried on Jan. 15.

Charging documents say cocaine was found in a wallet McGowan left on a plane last year. McGowan has maintained she's innocent, suggesting in court papers that the drugs were planted at the behest of producer Harvey Weinstein.

Reaction to rape and other criminal charges filed in New York on Friday against Harvey Weinstein:

"I hope this gives hope to victims and survivors everywhere, that we are one step closer to justice. Because one win is a win for all of us." — Weinstein accuser Rose McGowan, to The Associated Press. In a tweet: "We got you, Harvey Weinstein, we got you."

Rose McGowan on Weinstein: ‘One win is a win for all of us’

NEW YORK (AP) — She was one of the earliest Harvey Weinstein accusers, and she thought the mogul might never face justice in a court of law.

Now, actress Rose McGowan, who has accused Weinstein of raping her 20 years ago, is gratified but "still in shock" at his surrender Friday in a Manhattan courtroom on rape charges. And she prays that the charges will stick.

LEESBURG, Va. (AP) — Actress Rose McGowan says the cocaine found in her Chanel wallet left behind on a United Airlines flight isn't hers. Her lawyers have suggested the drugs were planted.

Nevertheless, McGowan could face indictment in Virginia on a felony drug-possession charge after a judge found probable cause Thursday to send the case to a grand jury.

McGowan unsuccessfully sought to have the charges dismissed at a preliminary hearing in Leesburg.

LEESBURG, Va. (AP) — Actress Rose McGowan could face indictment in Virginia on a felony drug-possession charge after a judge found probable cause Thursday to send the case to a grand jury.

McGowan unsuccessfully sought to have the charges dismissed at a preliminary hearing in Leesburg. A grand jury will hear the case June 11. While it is possible the grand jury could choose not to indict, in all likelihood she will face an arraignment in circuit court June 12.

LEESBURG, Va. (AP) — The Latest on a hearing on whether a drug possession charge in Virginia against actress Rose McGowan should go forward (all times local):

A drug possession charge against Rose McGowan is being sent to a Virginia grand jury after a judge found probable cause.

NEW YORK (AP) — Asia Argento said he raped her during the Cannes Film Festival. Mira Sorvino said he chased her around a hotel room at the Toronto International Film Festival. Rose McGowan's encounter happened at the Sundance Film Festival.

(THE CONVERSATION) Lawyers seem to at the center of lot of scandals lately.

LOS ANGELES (AP) — Jill Messick, who served as a producer on films such as "Frida" and "Baby Mama," has taken her own life, her family said in a statement Thursday. The mother of two died Wednesday in Los Angeles. She was 50.

McGowan: ‘you can’t put us back in the box’

Rose McGowan to Harvey Weinstein: There was no consent

NEW YORK (AP) — Rose McGowan says it's time for Harvey Weinstein to drop his story about a "consensual" relationship.

"He can fall off the planet," the activist said during an interview with The Associated Press on Wednesday. "My statement is truth. My statement is reality. Stop saying it's consensual, you pig! You know it's not true."

Attorney Ben Brafman wrote in a statement that McGowan is trying to smear Weinstein to promote her new book "Brave."

McGowan details her allegations against Weinstein in the memoir released Tuesday. She said in the book that the producer forced himself on her during what began as a business meeting at the Sundance Film Festival in 1997.

LEESBURG, Va. (AP) — A hearing on actress Rose McGowan's upcoming trial on a drug charge has been postponed due to a prosecutor's scheduling conflict.

Police say McGowan's belongings — left on a January 2017 flight arriving at Washington Dulles International Airport — tested positive for cocaine. She's been charged with felony possession of a controlled substance and has said she intends to plead not guilty.

Robert Redford addresses Weinstein, Me Too at Sundance

Sundance Institute founder Robert Redford did not shy away from addressing the elephants in the room — Harvey Weinstein and the #MeToo — Thursday at the Sundance Film Festival, saying that the fallen executive is not "going to stop the show."

Both the lingering shadow of Weinstein, who long lorded over the indie film festival, and the Me Too movement dominated conversation at the historically tame opening day press conference in Park City, Utah.

WASHINGTON (AP) — A Virginia county prosecutor has recused himself from actress Rose McGowan's upcoming trial for felony possession of a controlled substance, citing conflict of interest.

PASADENA, Calif. (AP) — Rose McGowan, refusing to mention Harvey Weinstein by name, said unspecified legal action by the man she instead calls "the monster" is forcing her to sell her house to fight him.

The actress-turned-activist spoke to TV critics Tuesday about her upcoming documentary series "Citizen Rose" and what she called her global struggle against sexual assault and economic injustice.

PASADENA, Calif. (AP) — The Latest on ABC's upcoming programming from the TV Critics meeting in Pasadena, California (all times local):

Rose McGowan, refusing to Harvey Weinstein by name, says legal action by the man she calls "the monster" is forcing her to sell her house to fight him.

The actress-turned-activist spoke to TV critics Tuesday about her new documentary series "Citizen Rose" and what she called her global fight against sexual misconduct and injustice.

NEW YORK (AP) — Actress and activist Rose McGowan will be the subject of a new documentary TV series.

E! said Tuesday it will air the first part of "Citizen Rose" on Jan. 30, which coincides with the release of her memoir, "Brave." Four more episodes will air in the spring.

McGowan helped open a national public discussion about sexual harassment and abuse when she accused Hollywood mogul Harvey Weinstein of raping her. Weinstein has repeatedly denied "allegations of non-consensual sex."

LOS ANGELES (AP) — Meryl Streep says she did not know Harvey Weinstein was allegedly harassing and assaulting women when they worked together.

Streep says in a statement Monday that Weinstein "needed me much more than I needed him and he made sure I didn't know." The Oscar winner says her association with him brought him credibility, which she says he used "to lure young, aspiring women into circumstances where they would be hurt."

Cooper says they plan to publicly share a code of conduct previously only seen by staff and volunteers. The festival also plans to host multiple panels about sexual misconduct and misuse of power.

Uma Thurman lashes out at Harvey Weinstein in cryptic post

In a cryptic Instagram post Thursday , the actress wishes her followers a happy Thanksgiving but adds, "except you Harvey, and all your wicked conspirators." She says she's "glad it's going slowly — you don't deserve a bullet."

By The Associated PressNovember 16, 2017 GMT

Actress Rose McGowan has waived her appearance in court on a felony charge of cocaine possession.

McGowan had been expected to appear in a courtroom for her arraignment Thursday, but a judge agreed to waive her appearance at the request of her lawyer. The judge scheduled a preliminary hearing for Jan. 23, when McGowan is expected to enter a plea.

The felony charge stems from what prosecutors say was cocaine found among McGowan's personal belongings left behind on a Jan. 20 flight to Washington Dulles International Airport in Virginia.

WASHINGTON (AP) — Actress Rose McGowan, a leading voice against sexual harassment in Hollywood, has accepted an arrest warrant on a drug charge in a Washington suburb.

What’s next in the criminal probe of Harvey Weinstein

NEW YORK (AP) — A criminal investigation by New York police into 2010 rape allegations against Harvey Weinstein does not necessarily mean an arrest is imminent.

NEW YORK (AP) — The New York Times on Tuesday fired lawyer David Boies' firm after learning it tried to halt the newspaper's investigation into sexual harassment charges against Hollywood mogul Harvey Weinstein while also representing the newspaper on other matters.

Boies has disputed the Times' view that his work for Weinstein represented a conflict of interest. Still, he no longer works for Weinstein and said the task he completed for him was a mistake.

NEW YORK (AP) — Rose McGowan's publisher has set a January release for her memoir "Brave," a month ahead of its original on-sale date.

Warrant issued for Rose McGowan in relation to drug charge

WASHINGTON (AP) — An arrest warrant has been obtained for actress Rose McGowan for felony possession of a controlled substance.

The felony charge stems from a police investigation of personal belongings left behind on a United flight arriving at Washington Dulles International Airport on Jan. 20. Police say the items tested positive for narcotics. The Metropolitan Washington Airports Authority Police Department obtained the warrant on Feb. 1

Actress Rose McGowan says her silence over on sexual assault

DETROIT (AP) — In her first public comments since accusing film producer Harvey Weinstein of rape, actress Rose McGowan said Friday she has been "silenced for 20 years" but won't remain quiet about sexual assault and harassment.

McGowan, delivering opening remarks at The Women's Convention in Detroit, thanked the audience "for giving me wings during this very difficult time."

McGowan Says Her Silence on Sex Assault is Over

Twitter toughens abuse rules - and now has to enforce them

NEW YORK (AP) — Twitter is enacting new policies around hate, abuse and advertisements, but having rules is only half the battle — the easy half.