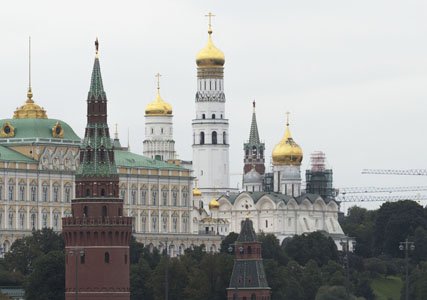 Russian hacking
In 2017 the AP was provided with 19,000 malicious links created by Russian hackers, the same spear phishing links detailed in a new indictment that names 12 Russian military intelligence officers. The AP investigation into the hacks includes a forensic look into how the hackers worked their way around the Clinton campaign’s top-of-the-line digital security.
Click to copy

Russian hackers posed as IS to threaten military wives

PARIS (AP) — Army wife Angela Ricketts was soaking in a bubble bath in her Colorado home, leafing through a memoir, when a message appeared on her iPhone:

"We know everything about you, your husband and your children," the Facebook message continued, claiming that the hackers operating under the flag of Islamic State militants had penetrated her computer and her phone. "We're much closer than you can even imagine."

FBI leaves US targets of Russian hackers in the dark

WASHINGTON (AP) — The FBI failed to notify scores of U.S. officials that Russian hackers were trying to break into their personal Gmail accounts despite having evidence for at least a year that the targets were in the Kremlin's crosshairs, The Associated Press has found.

WASHINGTON (AP) — It was just before noon in Moscow on March 10, 2016, when the first volley of malicious messages hit the Hillary Clinton campaign.

The first 29 phishing emails were almost all misfires. Addressed to people who worked for Clinton during her first presidential run, the messages bounced back untouched.

LONDON (AP) — The Russian hackers indicted by the U.S. special prosecutor last month have spent years trying to steal the private correspondence of some of the world's most senior Orthodox Christian figures, The Associated Press has found, illustrating the high stakes as Kiev and Moscow wrestle over the religious future of Ukraine.

PARIS (AP) — Russian television anchor Pavel Lobkov was in the studio getting ready for his show when jarring news flashed across his phone: Some of his most intimate messages had just been published to the web.

Days earlier, the veteran journalist had come out live on air as HIV-positive, a taboo-breaking revelation that drew responses from hundreds of Russians fighting their own lonely struggles with the virus. Now he'd been hacked.

Milton claimed to work for the Moscow-based anti-virus firm Kaspersky. In an exchange that began in halting English and quickly switched to Russian, Milton said she was impressed by the researcher's work on exploits — the digital lock picks used by hackers to break into vulnerable systems — and wanted to be copied in on any new ones that the researcher came across.

WASHINGTON (AP) — At the beginning of 2017, one of Julian Assange's biggest media boosters traveled to the WikiLeaks founder's refuge inside the Ecuadorean Embassy in London and asked him where he got the leaks that shook up the U.S. presidential election only months earlier.

The previous week, Katenberg's hacking crew had been bombarding the Hillary Clinton campaign's email accounts with fake Google warnings, trying to get her Brooklyn-based staff to panic, enter their passwords and open their digital lives to Russia's intelligence services.

12 Russians indicted for meddling in 2016 US election

WASHINGTON (AP) — Twelve Russian military intelligence officers hacked into the Clinton presidential campaign and the Democratic Party and released tens of thousands of private communications in a sweeping conspiracy by the Kremlin to meddle in the 2016 U.S. election, according to an indictment announced days before President Donald Trump's summit with Russian President Vladimir Putin.

What ultimately may have been stolen is uncertain, but the hackers clearly exploited a national vulnerability in cybersecurity: poorly protected email and barely any direct notification to victims.

AMSTERDAM (AP) — The Netherlands' spy service broke into the computers used by a powerful Russian hacking group and may be sitting on evidence relating to the breach of the U.S. Democratic National Committee, a Dutch newspaper and television show jointly reported Friday.

PARIS (AP) — The same Russian government-aligned hackers who penetrated the Democratic Party have spent the past few months laying the groundwork for an espionage campaign against the U.S. Senate, a cybersecurity firm said in a report Friday.

FBI deviated from its policy on alerting hacking victims

WASHINGTON (AP) — The FBI deviated from its own policy to notify victims of computer hacking when it left U.S. officials and other Americans in the dark about Kremlin-aligned attempts to break into their personal Gmail accounts, The Associated Press has learned.

Just another day at the (Moscow) office?

More than 95 percent of the malicious links used for the hackers’ phishing attempts were generated during Moscow office hours -- between 9 a.m. and 6 p.m. Monday to Friday.

Hackers hounded the Democratic Party into the final days of the 2016 election, breaking into a server carrying critical voter data, according to a book published Tuesday.

By RAPHAEL SATTER and JEFF DONN and JUSTIN MYERSNovember 2, 2017 GMT

It wasn't just Hillary Clinton's emails they went after.

The hackers who disrupted the U.S. presidential election last year had ambitions that stretched across the globe, targeting the emails of Ukrainian officers, Russian opposition figures, U.S. defense contractors and thousands of others of interest to the Kremlin, according to a previously unpublished digital hit list obtained by The Associated Press.

Was It Russia? AP Analysis Of Hacking Data