LOS ANGELES (AP) — True to form, Betty White has something impish to say about her birthday Sunday.

“Since I am turning 99, I can stay up as late as I want without asking permission!” she...

It's a demonstrably difficult task to find a comic screen partner worthy of standing opposite Melissa McCarthy, so you have to appreciate “Superintelligence" for throwing in the towel.

NASHVILLE, Tenn. (AP) — Singer and actor Harry Connick Jr. has spent a lot of his life on tour buses and traveling from city to city, but even when the pandemic shut down the country, he couldn’t...

Review: In ‘Marianne & Leonard,’ a love immortalized in song

It's not exactly a hit parade, the songs that have been turned into movies. There was the shambling reconstruction of Arlo Guthrie's "Alice's Restaurant," the fizzy pop of "Earth Girls Are Easy,"...

NEW YORK (AP) — Netflix will remove footage of a real fiery train disaster from its hit post-apocalyptic survival film "Bird Box" months after the streaming giant was criticized for exploiting a...

Netflix has no plans to cut ‘Bird Box’ scene despite outcry

NEW YORK (AP) — Netflix's post-apocalyptic survival film "Bird Box" is drawing criticism for using footage of a real fiery train disaster but the streaming giant has no plans to remove it.

The footage concerns a 2013 tragedy in the Quebec town of Lac-Megantic when an unattended train carrying crude oil rolled down an incline, came off the tracks and exploded into a massive ball of fire, killing 47 people.

SALT LAKE CITY (AP) — Police say a Utah teenager crashed into another car when she covered her eyes as part of the so-called "Bird Box Challenge."

Layton police Lt. Travis Lyman said Friday that the 17-year-old drifted into oncoming traffic and hit another car after she pulled a hat over her eyes to emulate "Bird Box," a Sandra Bullock movie on Netflix where characters must be constantly blindfolded to avoid visions that urge them to die.

NEW YORK (AP) — For so long, movies around the holidays have been merry and bright. Lately, more and more seem murderous and designed to fright.

Take this winter, where, of course, sugary options abounded, such as "Mary Poppins Returns" on the big screen and "A Christmas Prince: The Royal Wedding" on TV. Then there's the post-apocalyptic survival story "Bird Box."

Released just days before Christmas on Netflix, the Sandra Bullock-led thriller "Bird Box" is about monstrous entities that compel any human who sees them to try to kill themselves.

Even though Netflix declines to release viewership numbers, "Bird Box" seems to have struck a nerve, triggering the creation of memes and online chatter.

NEW YORK (AP) — Sandra Bullock has an impromptu idea for how to solve the Oscars host problem, and it involves a lot of improvisation.

The Oscar-winning actress told The Associated Press Monday at a screening of her new film "Bird Box " that she thinks random actors should be pulled out of the audience and read what's on the teleprompter to cover a segment of the show. 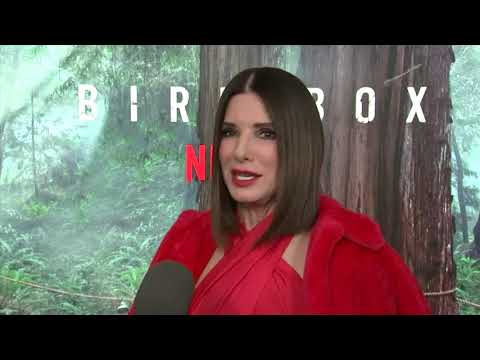 Sandra Bullock: ‘There was no safety net’ 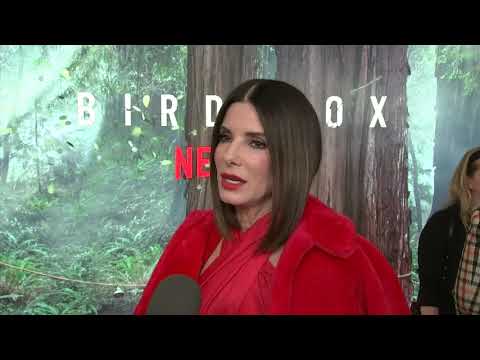 LOS ANGELES (AP) — Awkwafina became a household name this summer, stealing scenes from the likes of Cate Blanchett and Sandra Bullock in the heist movie "Ocean's 8" and then as a standout in the cultural phenomenon that was "Crazy Rich Asians."

But even considering her blockbuster summer, the 29-year-old New York native, born Nora Lum, whose dad wanted her to be an air traffic controller, still feels pretty normal.

Bullock hops into horror, says set was affected by MeToo 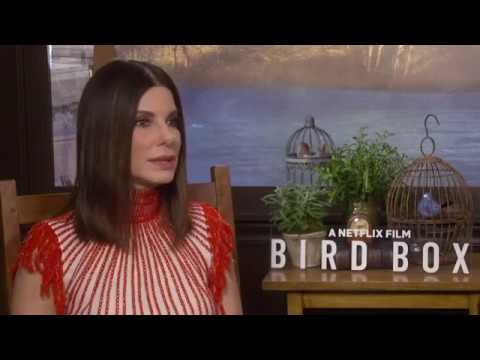 LOS ANGELES (AP) — Hollywood cut back on the glamor trappings of movie premieres as a vast wildfire destroyed or imperiled the homes of celebrities and other Southern California residents.

A red carpet for the Sandra Bullock film "Bird Box" was canceled Monday by the studio and one planned for "Under the Silver Lake" with Andrew Garfield was switched to a photo opportunity, an AFI Fest spokeswoman said.

Netflix to give 3 films an exclusive run in theaters

NEW YORK (AP) — Netflix will give three films an exclusive run in theaters before making them available on its streaming service.

Up until now, Netflix has steadfastly insisted on releasing films in theaters only simultaneously with their streaming premiere. Netflix's major pivot will give a handful of its most anticipated movies a stand-alone run in a relatively small number of theaters. Major chains still refuse to screen films that don't adhere to an exclusive 90-day window.

Emmys: An epic proposal, but winners lacking in diversity

"The Proposal." It was a 2009 movie starring Sandra Bullock, but now will forever be the informal title of the 2018 Emmys telecast, thanks to a memorable romantic gesture from Emmy-winning director Glenn Weiss — who summoned the courage to propose to his girlfriend on live TV.

She said yes — thank the Lord. The stars in the audience responded with gasps (we saw you, Leslie Jones) and even tears (we saw you too, Queen Elizabeth — er, Claire Foy.)

Steven Soderbergh's "Ocean's Eleven" remake is a hard movie to live up to. Its starry charm was backed by a breezy and deceptively dense script full of memorable characters, dizzyingly complex logistics and lively filmmaking that Soderbergh himself couldn't even recreate in the two sequels. But it is undeniable that even the near-perfect "Eleven" was missing something pretty major: Women. You know, besides Julia Roberts, that blackjack dealer and the one exotic dancer.

Bullock: Tabloids made up ‘Ocean’s’ catfights

ATLANTA (AP) — Georgia House candidate Sandra Bullock — not the Hollywood one — has withdrawn from the race after winning the Democratic Party primary last week.

Sandra Bullock, no not that one, wins Georgia House primary

ATLANTA (AP) — A woman running for the Georgia House sailed through her primary with admittedly little effort_and she thinks her famous-sounding name may have helped.

LOS ANGELES (AP) — A man who killed himself during a standoff with Los Angeles police was convicted last year of breaking into Sandra Bullock's home and stalking the Oscar-winning actress, his lawyer said Thursday.

LAS VEGAS (AP) — Warner Bros. Pictures brought out the big names for its CinemaCon presentation Tuesday, from stars like Sandra Bullock to movies like "Wonder Woman 2," but it was Bradley Cooper's "A Star is Born" that stole the show.

Cooper showed the emotional first trailer for the film to conference attendees in Las Vegas to some hearty, and rare, applause from the crowd of theater owners and exhibitors.

By The Associated PressMarch 5, 2018 GMT

On a night featuring real-life heroines, many actresses went for something strong and bold on the Oscar red carpet — something metallic.

Jennifer Lawrence, Lupita Nyong'o, Gal Gadot, Salma Hayek and Sandra Bullock literally shimmered in gold and silver gowns. They stood out on a carpet that starred mostly whites and neutrals.

Drama in red and neutrals on Oscars red carpet

Looks in neutrals, reds and purples brought the drama Sunday on the Oscars carpet, along with a healthy dose of shiny gold, but Nicole Kidman stood out in stunning cobalt blue at Hollywood's biggest fashion show.

A-listers dress down for casual day at the Academy Awards

Even if all the right envelopes end up in the right hands, there are still lots of moving parts — literally. Stage elements move all around, screens lower from the ceiling, and microphones pop up from the floor.

That pop-up mike immediately caused Sandra Bullock to panic during rehearsals Saturday afternoon, as she imagined it catching her gown and "suddenly the dress is just rising up."

Next Miss America could be pilot, governor, alpaca farmer

ATLANTIC CITY, N.J. (AP) — One wants to be the first female governor of North Dakota. One is a half-blind baton twirler who performed at a Super Bowl. Another wants to chase tornadoes.

One wants to run an alpaca farm, another is a former NFL cheerleader, yet another wants to sing the National Anthem at a Boston Red Sox game, and there is another who wants to be a criminal profiler for the FBI.

HOUSTON (AP) — Houston Rockets point guard James Harden says he will donate $1 million to the city of Houston to aid in Harvey recovery.

Harden made the announcement Saturday with Houston Mayor Sylvester Turner. They spoke at a news conference at the NRG Center, which has housed evacuees since Harvey swamped the Houston area more than a week ago.

From Bullock to DiCaprio, a look at stars’ Harvey donations

HOUSTON (AP) — A pair of Oscar winners, Sandra Bullock and Leonardo DiCaprio, are leading the way in stars' donations to relief efforts for those affected by Hurricane Harvey in Texas and Louisiana, but they're not alone. Numerous other celebrities have pledged sizable amounts to charities.

Here's a list of stars who have publicly pledged to donate:

LOS ANGELES (AP) — A man who broke into Sandra Bullock's home in 2014 and forced the Oscar-winning actress to hide in her closet while calling police has been sentenced to continued mental health treatment and probation after pleading no contest to felony stalking and burglary charges.

Tom Hanks, Alec Baldwin and other stars joined in an online fundraiser for the American Civil Liberties Union, urging the public to help protect bedrock rights they warned are in jeopardy.

Hanks said actions such as President Donald Trump's attempted travel ban represent a "brand of tragedy" and not the America the actor learned about as a youngster.

LOS ANGELES (AP) — An appeals court ruled Tuesday that Los Angeles police detectives violated the rights of a man arrested inside Sandra Bullock's home when they obtained his consent to search his home and recovered illegal automatic firearms.

We seem to be shooting our best movie stars into outer space with alarming frequency. George Clooney, Sandra Bullock, Matthew McConaughey, Matt Damon and now Jennifer Lawrence and Chris Pratt have all been rocketed out of the stratosphere. Perhaps they're trying to make the best impression possible with alien life forms. Maybe they're seeking to colonize new worlds of moviegoers. In any case, the stars have never looked so starry.