Fallon Sherrock is casting her mind back four months, to a time when the world was a very different place, when sporting venues were full, and when she was briefly the talk of Britain.

Lynn Cohen, who played Magda in ‘Sex and the City,’ dies

NEW YORK (AP) — Lynn Cohen, an actress best known for playing the plainspoken housekeeper and nanny Magda in “Sex and the City,” has died. She was 86.

Reactions to the death of Doris Day

"Oh Ms. Day, A Cincinnati girl just like me. How many letters I drafted to you and didn't send. I could never get it right...

NEW YORK (AP) — Sarah Jessica Parker and a British jeweler have settled a breach-of-contract lawsuit against the actress.

Kat Florence Design sued Parker, arguing that she had agreed to...

NEW YORK (AP) — In a story Jan. 30 about Super Bowl ads, The Associated Press erroneously named one of the astronaut twins. The two are Mark and Scott Kelly, not Mark and Steve. 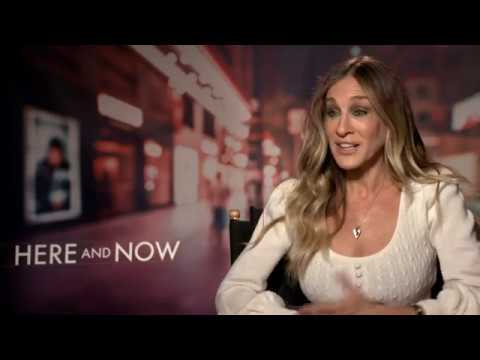 Carrie Bradshaw, ‘The Dude’ to star in Super Bowl commercial

LOS ANGELES (AP) — Sarah Jessica Parker and Jeff Bridges are bringing a couple of famed characters back to life for a charity in a new Super Bowl commercial.

Parker will reprise her "Sex and the City" Carrie Bradshaw role and Bridges will appear as "The Dude" in a Stella Artois commercial to raise money to combat water shortage. The 45-second ad launches Monday and will be televised during Super Bowl 53 on Feb. 3.

ATLANTIC CITY, N.J. (AP) — It might take some effort for a "Sex and the City" fan to picture their favorite characters gossiping in the booth that Bob and Loretta Pickus have in their Northfield home. It's not inside a swanky New York restaurant and there aren't four Cosmopolitans resting neatly on a table.

NEW YORK (AP) — For Michelle Obama, choosing what designer to wear while she was in the White House involved many factors, from diversity to whether they were a nice person.

Obama talked the decisions behind the outfits that made headlines during her time as first lady during a conversation with another fashion trendsetter, Sarah Jessica Parker, who was the moderator for the Wednesday night event for Obama's "Becoming" book tour.

NEW YORK (AP) — Oprah Winfrey and Reese Witherspoon will be among the special guests when Michelle Obama goes on tour for her memoir "Becoming."

Others appearing with the former first lady will include Sarah Jessica Parker, Michele Norris and former White House aide Valerie Jarrett. The announcement was made by Live Nation and Crown Publishing on Tuesday.

Parker said Thursday her former "Sex and the City" co-star would be "right for New York."

The actress spoke briefly about Nixon's New York gubernatorial run on the red carpet for the world premiere of her new film, "Blue Night," at the Tribeca Film Festival.

Parker endorsed Nixon on Instagram on Thursday, calling her "my sister on and off screen."

The women signed onto a letter to the Democratic governor as his administration examines whether to eliminate the subminimum wage paid to restaurant servers and other workers who make tips.

Kim Cattrall to Sarah Jessica Parker: You’re not my friend

NEW YORK (AP) — Kim Cattrall has a message for Sarah Jessica Parker: Spare me your sympathy.

Cattrall lashed out Saturday at her former "Sex and the City" co-star after Parker expressed her condolences over the death of Cattrall's brother, Chris.

Airbnb is launching local tours and other experiences in New York City this week, with one listing promising "an unforgettable shoe-shopping experience" led by a New Yorker whose bio describes her as "an actor, producer, businesswoman ... and a proud New Yorker."

That host is Sarah Jessica Parker. Each participant will get a pair of shoes from her SJP Collection at Bloomingdale's, with a stop at the department store's Forty Carrots cafe for frozen yogurt before the guests head off to the ballet.

NEW YORK (AP) — Some famous friends will be on hand for Mika Brzezinski's latest "Know Your Value" event.

Martha Stewart, Sarah Jessica Parker and Jane Pauley are among those expected Oct. 30 for an all-day conference at Manhattan's Grand Hyatt hotel.

"Know Your Value" is based on the best-selling book by the co-host of MSNBC's "Morning Joe."

Political thriller ‘Tangier’ to be shot on the Eastern Shore

PRINCESS ANNE, Md. (AP) — In 1986, "Violets are Blue," a movie about high school sweethearts rekindling their lost love, was filmed on location in Ocean City.

Then came "The Runaway Bride" in 1999, starring Julia Roberts and Richard Gere, with scenes shot in Berlin and Snow Hill.

After that, Matthew McConaughey went to Easton to film scenes for "Failure to Launch," released in 2006, which also starred Sarah Jessica Parker.

Russia: Sarah Jessica Parker can meet envoy if she wants

MOSCOW (AP) — Russia's foreign ministry says it would be happy to play matchmaker between American actress Sarah Jessica Parker and Moscow's ambassador to the United States.

Parker on Thursday made a post on Instagram showing her typing at a computer, captioned: "I couldn't help but wonder ... had the Russian ambassador been meeting with everyone but me?"

Questions have arisen in Congress and the media about Russian Ambassador Sergei Kislyak's meetings with members of the Trump administration.

NEW YORK (AP) — Sarah Jessica Parker is adding another credit to her life as a bookworm.

The "Sex and the City" actress is serving as honorary chair of the American Library Association's newly created Book Club Central. The library association told The Associated Press on Wednesday that the club will recommend books throughout the year and will formally launch in Chicago on June 24, during the ALA's annual conference.

While largely a snooze, the red carpet fashion from Sunday's Golden Globes in Beverly Hills, California, did have its unexpected moments, along with some classic Hollywood style with modern twists.

Celebrities of all types are fanning out for Clinton

The star of "Dawson's Creek" and "Freaks and Geeks" pitched in recently in Iowa. But she wasn't addressing giant rallies or hosting big-ticket fundraisers. Instead, the exuberant blonde spoke to about 20 women in the cavernous Des Moines skywalk, encouraging them to vote early on their lunch break.

The annual event is set for Dec. 11 in Oslo, Norway. Halsey will perform. Previous hosts include Jay Leno and Sarah Jessica Parker, while entertainment has ranged from Mary J. Blige to Paul McCartney.

O'Brien, who hosts his own late-night show, "Conan," on TBS, said in statement Thursday that it was an honor to host the concert. He jokingly thanked his agent.

NEW YORK (AP) — In August 2000, a Time magazine cover story touting singles life displayed Sarah Jessica Parker and her three "Sex and the City" co-stars with the headline: "Who Needs a Husband?"

That question could apply, in spades, to Parker's new HBO comedy, a piercingly honest yet droll exploration of a marriage on the rocks titled, brazenly, "Divorce."

NEW YORK (AP) — Saying she is "disappointed, saddened and deeply concerned" by the price hike of the EpiPen, actress Sarah Jessica Parker has cut ties with the company that makes the emergency allergy treatment.

Parker, whose 13-year-old son James has severe peanut and hazelnut allergies, was part of a short campaign with pharmaceutical giant Mylan N.V., maker of the EpiPen. She was never a spokeswoman.

BEVERLY HILLS, Calif. (AP) — A roundup of news from the Television Critics Association summer meeting, at which TV networks and streaming services are presenting details on upcoming programs.

EX IN THE CITY?

In "Sex and the City," Sarah Jessica Parker's wardrobe was all about the look and the label. In "Divorce," her new HBO comedy series, it's more about emotion.

Parker, back on HBO a decade after starring as single girl Carrie on "Sex and the...

BEVERLY HILLS, Calif. (AP) — In "Sex and the City," Sarah Jessica Parker's wardrobe was all about the look and the label. In "Divorce," her new HBO comedy series, it's more about emotion.

Parker, back on HBO a decade after starring as the single Carrie on "Sex and the City," plays a wife and mother who decides to end her marriage. She stars opposite Thomas Haden Church.

Clothing is part of "the whole person in a much more subtle way. You see it in everything: in...