No Republican has reached the White House without carrying Ohio. The last...

Lawmakers said Friday that the U.S. government needs to ban the import of products made with child or forced labor after an Associated Press investigation found widespread exploitation in the palm...

LOS ANGELES (AP) — A Southern California man who was convicted of making some 10,000 harassing and threatening telephone calls to government offices, including those of several congressional...

WASHINGTON (AP) — The questions from senators at President Donald Trump's impeachment trial continued by the dozens on Thursday, with lawmakers inquiring about foreign election interference, the...

US attorney for southern Ohio stepping down

U.S. Attorney Benjamin Glassman of Cincinnati is stepping aside for...

The school announced Tuesday that Brown will speak to 3,600 students...

COLUMBUS, Ohio (AP) — Ohio has received $17.8 million to generate data on self-driving vehicles, an area of research in which the state is already playing a prominent role, according to the...

TOLEDO, Ohio (AP) — Democrat Sherrod Brown is pushing his party's 2020 hopefuls to talk more about "pro-worker" issues, saying it's a sure way to beat President Donald Trump next year.

DAYTON, Ohio (AP) — The mayor of Dayton where nine people were slain in a mass shooting says a round-the-clock security detail was assigned to her because of hate-filled messages she received...

The Latest: Senator says prayers not enough after shooting

DAYTON, Ohio (AP) — The Latest on a deadly mass shooting in Dayton, Ohio (all times local):

Democratic U.S. Sen. Sherrod Brown of Ohio says "thoughts and prayers are not...

WASHINGTON (AP) — Under sharp criticism from senators, a Facebook executive on Tuesday defended the social network's ambitious plan to create a digital currency and pledged to work with regulators...

PORTLAND, Maine (AP) — Maine's Republican senator is joining a group of colleagues to beef up federal resources that are dedicated to getting fresh, local foods into schools.

Senators: Feds’ American flags should be made in America

BANGOR, Maine (AP) — A pair of senators says the American flags the federal government purchases should have to be made in America.

The head of the House Financial Services Committee wants Facebook to suspend plans for a new...

LORDSTOWN, Ohio (AP) — Members of Ohio's congressional delegation came away with few answers after meeting with the head of General Motors about the future of its shuttered assembly plant near...

CHATTANOOGA, Tenn. (AP) — Three Democratic U.S. senators are expressing concerns about delays to an election over whether Volkswagen maintenance and production workers in Tennessee should...

HUD grants state $6.2M to be spent on affordable housing

COLUMBUS, Ohio (AP) — Ohio is set to receive nearly $6.2 million in affordable housing grants from the U.S. Department of Housing and Urban Development.

Biden could get boost by back-to-back 2020 departures

WASHINGTON (AP) — Joe Biden isn't a presidential candidate yet. But with two key rivals already getting out of the way, the former vice president has more space to court voters who could help him...

Editorials from around Ohio

By The Associated PressMarch 4, 2019 GMT

Excerpts of recent editorials of statewide and national interest from Ohio newspapers:

By The Associated PressMarch 2, 2019 GMT

The Latest on the 2020 presidential campaign (all times EST):

Democrat Sherrod Brown hasn't decided yet whether he'll run for president in 2020, but the Ohio Democrat is...

MONTGOMERY, Ala. (AP) — Several Democratic presidential candidates are coming to Selma next weekend for the annual commemoration of the "Bloody Sunday" civil rights march.

Brown to speak at Nevada Democratic event, meet with workers

LAS VEGAS (AP) — Democratic Sen. Sherrod Brown is making his first visit to Nevada this month as he explores a potential 2020 bid for president.

Brown campaign spokeswoman Rachel Petri said the senator will bring the message of his "Dignity of Work" tour while speaking and taking questions at a Feb. 23 event at Henderson's Lovelady Brewing Company.

The Ohio senator will be appearing as the latest guest of the Nevada Democratic Party's "Local Brews and National Views" lecture series.

WASHINGTON (AP) — Sen. Sherrod Brown, a potential 2020 Democratic presidential contender, shrugged off arguments from liberals on Tuesday that signing onto the climate change plan known as the Green New Deal is essential to winning over the party's base.

HAMPTON, N.H. (AP) — Democratic Sen. Sherrod Brown is in New Hampshire for the weekend as he explores a potential 2020 presidential bid while trying to set himself apart with his broad appeal to the working class.

The Ohio senator spoke Friday at Winnacunnet High School in Hampton with five other panelists and an audience of about 50 people.

Democratic Sen. Sherrod Brown and Republican Sen. Rob Portman say they told GM officials this week they're outraged by what's been happening at the plant. 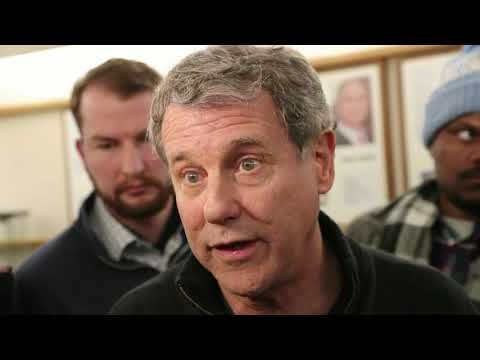 "We chose here because we grew up in communities that so often get ignored," Brown told about 30 Democratic activists in tiny Cresco. "Wall Street totally ignores communities like this and so too often does state and national government."

2020 Democrats weigh how to recapture voters in Midwest

WASHINGTON (AP) — The clearest path for Democrats to return to the White House runs straight through the upper Midwest, fueling debate over who is best positioned to recapture the region's working-class voters who broke for President Donald Trump in 2016.

The Ohio Democrat launched his "dignity of work" tour at a warehouse south of Cleveland. He and his wife, journalist Connie Schultz, head next to Iowa, New Hampshire, Nevada and South Carolina.

BRUNSWICK, Ohio (AP) — Sen. Sherrod Brown is ready to kick off his multi-state tour of states that cast pivotal early votes in the 2020 presidential primary.

The Ohio Democrat begins his "Dignity of Work" tour Wednesday in the Ohio city of Brunswick, about 25 miles (40 kilometers) southwest of Cleveland. The circuit is a key step before he decides whether to launch a campaign for the White House.

Warren instead planned to remain in Washington, D.C. as Congress was expected to vote on the plan.

She was expected to be the third potential Democratic 2020 candidate to hold public events in early-state Nevada this year.