ROME (AP) — Italy paid tribute Thursday to its ambassador to Congo and his bodyguard who were killed in an attack on a U.N. convoy, honoring them with a state funeral and prayers for peace in...

ACCRA, Ghana (AP) — Ghana’s former president Jerry Rawlings, who staged two coups and later led the West African country's transition to a stable democracy, has died, according to the state’s...

JOHANNESBURG (AP) — South African officials have gathered — not always at a distance — for the state funeral of anti-apartheid activist Andrew Mlangeni, the last surviving member of the group...

Tonga in national holiday to bid farewell to leader Pohiva

HARARE, Zimbabwe (AP) — African heads of state joined thousands of Zimbabweans at a state funeral Saturday for Zimbabwe's founding president, Robert Mugabe , whose burial has been delayed for at...

Zimbabwe’s Mugabe to be buried in 30 days, at new mausoleum

HARARE, Zimbabwe (AP) — The burial of Zimbabwe's founding president, President Robert Mugabe , will be delayed for at least a month until a special mausoleum can be built at a prominent spot at...

By NOMAAN MERCHANT and JUAN A. LOZANODecember 6, 2018 GMT

HOUSTON (AP) — Former President George H.W. Bush will be buried in Texas after a funeral service at the church he attended for many years and a special memorial train that will carry his casket.

The founder of Poland's anti-communist Solidarity movement attended President George H.W. Bush's state funeral in Washington wearing a T-shirt bearing the word "Konstytucja" (Constitution), a symbol of a political struggle in his homeland against the populist government.

WASHINGTON (AP) — The nation bid goodbye to George H.W. Bush with high praise, cannon salutes and gentle humor Wednesday, celebrating the life of the Texan who embraced a lifetime of service in Washington and was the last president to fight for the U.S. in wartime. Three former presidents looked on at Washington National Cathedral as a fourth — George W. Bush — eulogized his dad as "the brightest of a thousand points of light." 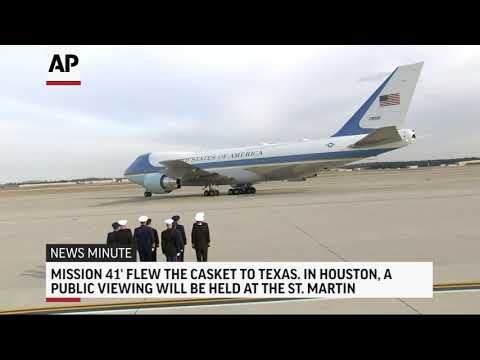 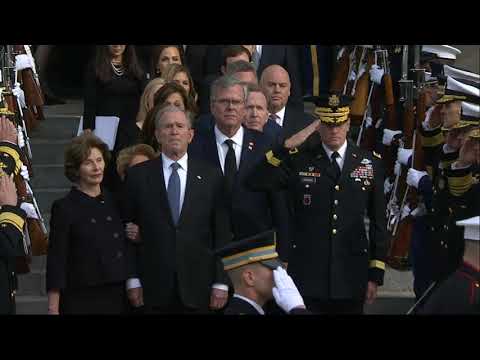 By The Associated PressDecember 5, 2018 GMT

Distinguished Guests, including our Presidents and First Ladies, government officials, foreign dignitaries, and friends: Jeb, Neil, Marvin, Doro, and I, and our families, thank you all for being here.

I once heard it said of man that "The idea is to die young as late as possible." (Laughter.)

The Republican governor's office announced that he will attend Wednesday's state funeral service for the 41st president at the Washington National Cathedral.

WASHINGTON (AP) — Former first lady Laura Bush said her tour of the White House Christmas decorations Tuesday made for a "sweet visit" during a somber week.

Mrs. Bush also visited with friends who take care of the White House residence, where she and President George W. Bush lived during his two terms in office from 2001 to 2009.

TORONTO (AP) — Former Prime Minister Brian Mulroney will deliver a eulogy and be among those representing Canada at the state funeral for former President George H.W. Bush.

Prime Minister Justin Trudeau also tweeted that flags on federal buildings in Canada and at Canadian offices in the U.S. will be flown at half-mast on Wednesday.

By The Associated PressDecember 4, 2018 GMT

Former President George H.W. Bush's state funeral encompasses four days of events, from his arrival in Washington to his burial in Texas on Thursday.

The guidelines for state funerals date back to the mid-1800s and have been shaped over time. Seating arrangements, for example, are detailed with precision, with the presidential party followed by chiefs of state, arranged alphabetically by the English spelling of their countries.

The nation's 41st president is lying in state at the Capitol Rotunda. The Trumps stood in front of the casket Monday evening with their eyes closed for a few moments.

After Trump saluted the casket, the pair walked out.

Grammy noms to be released Friday instead of Wednesday

NEW YORK (AP) — The nominations for the 2019 Grammy Awards, originally planned for Wednesday, will now be announced Friday.

The Recording Academy said Monday that because of former President George H.W. Bush's funeral and public viewing this week, it will push back the release of its nominations.

It's a busy week for the entertainment world: Nominations for the 2019 Golden Globes come out Thursday.

Americans to begin saying their goodbyes to George H.W. Bush

WASHINGTON (AP) — Americans will begin saying goodbye to former President George H.W. Bush on Monday when his body arrives in Washington for public viewing in the Capitol Rotunda — a rare honor that will be bestowed on a man who earned the respect and admiration of many with his leadership, bravery and grace.

In a statement issued hours after Bush's death on Friday night, the Trumps said that Bush had "inspired generations of his fellow Americans to public service."

BUENOS AIRES, Argentina (AP) — The Latest on President Donald Trump at the Group of 20 summit (all times local):

HANOI, Vietnam (AP) — Vietnam will hold a state funeral and national mourning this week for President Tran Dai Quang, who died last week of a viral illness at age 61.

Flags will fly at half-staff and entertainment activities will be canceled during the two-day funeral that starts Wednesday, the Communist Party and government announced.

Quang will be buried in his home village in northern Ninh Binh province, some 115 kilometers (72 miles) south of Hanoi on Thursday.

ACCRA, Ghana (AP) — United in sorrow, world leaders and international dignitaries came to Ghana to pay their last respects to the late United Nations Secretary-General Kofi Annan who was honored with a state funeral Thursday, as many lauded him as an exceptional man and leader.

Annan died on Aug. 18 in Bern, Switzerland at age 80. The grandson of tribal chiefs, he was the first black African to become the U.N. leader and was awarded a Nobel Peace Prize.

Annan died in August in Switzerland at age 80. The grandson of tribal chiefs, he was the first black African to become the U.N. leader and was awarded a Nobel Peace Prize.

Ghanaians have thronged at a conference center in Accra to remember him.

President Nana Addo Dankwa Akufo-Addo was with Annan's widow and family members Monday as uniformed soldiers brought Annan's coffin down from the aircraft amid solemn music played by a detachment of Ghana's armed forces. Prayers followed.

GENOA, Italy (AP) — Italy's president demanded guarantees Saturday that all the nation's roads are safe following the Genoa highway bridge collapse, after he hugged and comforted mourners at a state funeral in the grieving port city.

President Sergio Mattarella spoke quietly to victims' families before the ceremony began on Genoa's fairgrounds. Usually reserved in demeanor, Mattarella was embraced tightly for a long moment by one distraught woman.

GENOA, Italy (AP) — With anger and grief, Italians began burying some of their dead Friday from the Genoa highway bridge collapse, holding funerals in the victims' hometowns. Several angry families rebuffed the offer of a state funeral and the cardinal of Naples was merciless in his condemnation of negligence by Italian officials.

The Latest: Italy buries its Genoa dead as emotions surge

GENOA, Italy (AP) — The Latest on this week's bridge collapse in Italy's Genoa (all times local):

With anger and grief, Italians began burying some of their dead from the Genoa highway bridge collapse, holding funerals in the victims' hometowns.

Several angry families rebuffed the offer of a state funeral and the cardinal of Naples was merciless Friday in his condemnation of negligence by Italian officials.

Winnie Madikizela-Mandela: A life of struggle

JOHANNESBURG (AP) — Even the name given to Winnie Madikizela-Mandela at birth — Nomzamo, "one who undergoes trials" — foretold a life of struggle.

During her nearly 38-year marriage to Nelson Mandela, she fought for black majority rule even as she vowed to escape the shadow of the great man.

And although many South Africans called her the "Mother of the Nation," she would become engulfed in criminal convictions and scandals.

S Africa to give state burial to Winnie Madikizela-Mandela

JOHANNESBURG (AP) — Nelson Mandela's ex-wife Winnie Madikizela-Mandela, an anti-apartheid activist in her own right whose reputation was sullied by scandal, has died. She was 81.

Madikizela-Mandela will be honored by a state funeral on April 14, preceded by an official memorial service on April 11, said President Cyril Ramaphosa after visiting her home in Johannesburg's Soweto township Monday evening.

ATLANTA (AP) — At a funeral that began with the voice of Ray Charles singing "Georgia On My Mind" and ended with taps echoing through the ornate Georgia Capitol rotunda, former Gov. Zell Miller was celebrated Wednesday as a beloved leader who helped bring the state into a more modern era.

The motorcade carrying former Gov. and U.S. Sen. Zell Miller's flag-draped casket has arrived at the Georgia Capitol where he will lie in state until a state funeral Wednesday.

Republican and Democratic state lawmakers lined up in front of the Capitol to pay tribute as the casket arrived. Gov. Nathan Deal and his wife led the procession into the building as bagpipes played.

The Latest: 3 ex-presidents to speak at Zell Miller service

ATLANTA (AP) — Funeral arrangements for former Georgia Gov. Zell Miller have been released and include opportunities for friends and family to bid farewell to Miller, who also served as a U.S. senator.

A public memorial service will be held Monday in Young Harris, Georgia, where Miller died Friday at the age of 86.