EXPLAINER: The Supreme Court ruling against the NCAA

A Supreme Court ruling that went against the NCAA could open the door to schools using unlimited benefits tied to education to recruit top athletes.

The NCAA’s loss in a 9-0 decision will not directly lead to play-for-pay in college athletics, but it did clear a path for future legal challenges that could be even more impactful.

WASHINGTON (AP) — The Supreme Court ruled unanimously Monday the NCAA can’t limit education-related benefits — like computers and paid internships — that colleges can offer their sports stars, a victory for athletes that could help open the door to further easing in the decades-old fight over paying student-athletes. 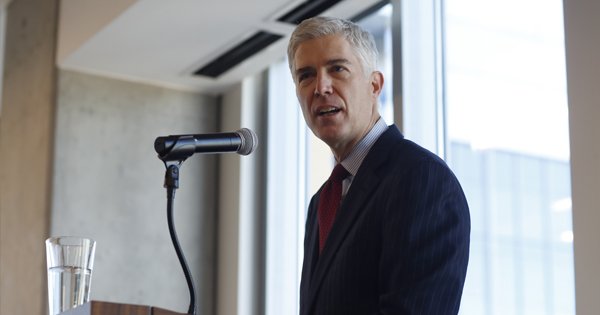 The NCAA has taken another hit in court, this time at the highest level, and yet insists it is an isolated setback and not a major step toward bringing down its version of amateurism.

Legal analysts agree with that — at least until the next court challenge comes.

WASHINGTON (AP) — The Supreme Court on Monday ruled that Congress erred when it set up a board to oversee patent disputes by failing to make the judges properly accountable to the president.

EUGENE, Ore. (AP) — Were it not for Shelby Houlihan and her head-scratching case involving a pork burrito, the talk of doping — and, thus, track and field — on Saturday might very well have been Brianna McNeal.

WASHINGTON (AP) — With the Affordable Care Act now secure in the framework of the nation's health care programs, Democrats are eager to leap above and beyond.

They want to expand insurance coverage for working-age people and their families, add new benefits to Medicare for older people and reduce prescription drug costs for patients and taxpayers.

WASHINGTON (AP) — The Supreme Court's latest rejection of a Republican effort to dismantle “Obamacare” signals anew that the GOP must look beyond repealing the law if it wants to hone the nation's health care problems into a winning political issue.

WASHINGTON (AP) — In another victory for religious groups at the Supreme Court, the justices on Thursday unanimously sided with a Catholic foster care agency that says its religious views prevent it from working with same-sex couples.

Republicans turned up pressure on Kentucky's Democratic governor Thursday to renew a contract with a Baptist-affiliated children's agency, reacting to a U.S. Supreme Court ruling they say should settle the dispute between religious beliefs and gay rights.

Justice Samuel Alito called it a “wisp” of a decision — a Supreme Court ruling Thursday that favored Catholic Social Services in Philadelphia but was far from the constitutional gale wind that would have reshaped how courts interpret religious liberty under the First Amendment.

WASHINGTON (AP) — The Supreme Court sided with food giants Nestle and Cargill on Thursday and threw out a lawsuit that claimed they knowingly bought cocoa beans from farms in Africa that used child slave labor.

WASHINGTON (AP) — The number of Americans applying for unemployment benefits rose last week for the first time since April despite widespread evidence that the economy and the job market are rebounding steadily from the pandemic recession.

MADRID (AP) — Environmental activists in Spain lodged a legal claim against the government Thursday for what they deem as insufficient ambition in reducing carbon emissions and other contributors to climate change.

RALEIGH, N.C. (AP) — North Carolina Gov. Roy Cooper granted a pardon Wednesday to a man who was once on death row for a shopkeeper’s slaying and spent more than 40 years in prison before he was released.

The U.S. Education Department on Wednesday expanded its interpretation of federal sex protections to include transgender and gay students, a move that reverses Trump-era policy and stands against proposals in many states to bar transgender girls from school sports.

MADISON, Wis. (AP) — A man convicted of killing his brother-in-law after he allegedly discovered child pornography on his computer deserves a new trial because a jury could decide he acted in self-defense, a divided Wisconsin Supreme Court ruled Wednesday.

BRATISLAVA, Slovakia (AP) — Slovakia's Supreme Court on Tuesday dismissed a lower court's acquittal of a businessman accused of masterminding the 2018 slayings of an investigative journalist and his fiancée.

WASHINGTON (AP) — The Senate on Monday confirmed the first appellate court judge of President Joe Biden’s tenure, elevating a judge with strong prospects of landing on the president's short list should a Supreme Court vacancy arise.

WASHINGTON (AP) — With abortion and guns already on the agenda, the conservative-dominated Supreme Court is considering adding a third blockbuster issue — whether to ban consideration of race in college admissions.

WASHINGTON (AP) — With abortion and guns already on the agenda, the conservative-dominated Supreme Court is considering adding a third blockbuster issue — whether to ban consideration of race in college admissions.

NC court: Students can use constitution to fight bullying

RALEIGH, N.C. (AP) — The constitutional right of North Carolina's children to have access to a good public school education also applies to individual students who aren't getting help to stop classroom bullying and harassment against them, the state Supreme Court ruled Friday.

The unanimous vote by the 11 justices provides relief for President Jair Bolsonaro and tournament organizers in Brazil, which is hosting the event after the withdrawal of Colombia and Argentina.

OKLAHOMA CITY (AP) — The U.S. Supreme Court has denied the appeal of an Oklahoma death row inmate convicted of beating a man to death with a hammer.

The court on Monday denied, without comment, the appeal of James Coddington, 49, who was convicted and sentenced to death for the 1997 death of Albert Troy Hale, 73, at Hale's home in Oklahoma County.

US fights ruling to extend SSI benefits to Puerto Rico

WASHINGTON (AP) — A unanimous Supreme Court ruled Monday that thousands of people living in the U.S. for humanitarian reasons are ineligible to apply to become permanent residents.

Justice Elena Kagan wrote for the court that federal immigration law prohibits people who entered the country illegally and now have Temporary Protected Status from seeking “green cards” to remain in the country permanently.

WASHINGTON (AP) — The Supreme Court said Monday that for now it’ll be up to Congress, not the court, to decide whether to change the requirement that only men must register for the draft. It's one of the few areas of federal law where men and women are still treated differently.

WASHINGTON (AP) — The Supreme Court agreed on Monday to decide whether a lawsuit can go forward in which a group of Muslim residents of California allege the FBI targeted them for surveillance because of their religion.

The Cyprus government continued for at least four years to unlawfully issue passports to relatives of wealthy investors under an investment-for-citizenship program, despite warnings by the Attorney-General that this could be in breach of the law, the head of an independent commission said on Monday.

SEOUL, South Korea (AP) — A South Korean court on Monday rejected a claim by dozens of World War II-era Korean factory workers and their relatives who sought compensation from 16 Japanese companies for their slave labor during Japan’s colonial occupation of Korea.

WASHINGTON (AP) — The Supreme Court is being asked to decide whether it's sex discrimination for the government to require only men to register for the draft when they turn 18.

The question of whether it's unconstitutional to require men but not women to register could be viewed as one with little practical impact.

WELLINGTON, New Zealand (AP) — New Zealand's top court on Friday left open the possibility that a man could be extradited to China to face murder charges in a landmark case that has big diplomatic implications.

WASHINGTON (AP) — The Supreme Court on Thursday limited prosecutors' ability to use an anti-hacking law to charge people with computer crimes.

Conservative and liberal justices joined to vote 6-3 to overturn the conviction of a police sergeant who used a work database to run a license plate search in exchange for money.

LOS ANGELES (AP) — The state of California has agreed not to impose greater coronavirus restrictions on church gatherings than it does on retail establishments in a pair of settlements that provide more than $2 million in fees to lawyers who challenged the rules as a violation of religious freedom.

WASHINGTON (AP) — The Supreme Court is leaving in place a $2 billion verdict in favor of women who claim they developed ovarian cancer from using Johnson & Johnson talc products.

The justices unanimously reversed an appellate ruling in favor of a non-Native motorist who was charged with drug-related crimes after a tribal officer searched his pickup truck on a public road that crosses the Crow reservation in Montana.

WASHINGTON (AP) — Johnson & Johnson is asking for Supreme Court review of a $2 billion verdict in favor of women who claim they developed ovarian cancer from using the company's talc products.

Breyer ‘basically optimistic’ about US despite polarization

WASHINGTON (AP) — The country may be increasingly divided along partisan lines, but Supreme Court Justice Stephen Breyer said Friday that he remains optimistic that America's system of democracy will continue to work.

RIO DE JANEIRO (AP) — Hundreds of wildcat miners attacked police who were trying to halt illegal mining in the Brazilian Amazon region and then raided an Indigenous village, setting houses on fire, federal prosecutors in the northern state of Para reported.

BATON ROUGE, La. (AP) — Louisiana lawmakers Thursday blocked an effort to offer a path to release for an estimated 1,500 prisoners convicted of felonies by juries that were not unanimous, a debate spurred by the U.S.