Yo, Adrian! ‘Rocky’ still packs a punch as Philly favorite

PHILADELPHIA (AP) — The Brazilian exchange student made one request of his host before his study abroad semester was cut short and he returned home to Sao Paulo:

At Philadelphia rally, Andrew Yang casts himself as underdog

Fall Movie Preview: A list of releases, from ‘It’ to ‘Joker’

Actor Rutger Hauer, of ‘Blade Runner’ fame, has died at 75

NEW YORK (AP) — Dutch film actor Rutger Hauer, who specialized in menacing roles, including a memorable turn as a murderous android in "Blade Runner" opposite Harrison Ford, has died. He was...

NEW YORK (AP) — Oscar-winning movie producer Irwin Winkler recalls the time he brought a promising script to United Artists. They hated virtually everything about it.

BUDAPEST, Hungary (AP) — Andy Vajna, a Hungarian-American film producer who worked on several "Rambo" movies with Sylvester Stallone, "Total Recall" with Arnold Schwarzenegger and Madonna's "Evita," has died. He was 74.

Vajna, who produced many other films, died Sunday at his Budapest home after a long illness, Hungary's National Film Fund said.

Schwarzenegger remembered Vajna as "a dear friend and a revolutionary force in Hollywood."

PALM BEACH, Fla. (AP) — President Donald Trump is back in his comfort zone at the "winter White House." Mar-a-Lago is where women in furs and men in diamond jewelry and monogrammed slippers mingle with Sylvester Stallone and Fabio at New Year's Eve celebrations, and Don King rubs elbows with Cabinet members, could-be ambassadors and the "MyPillow" guy at dinner.

Trump arrives at his comfort zone at ‘winter White House’

PALM BEACH, Fla. (AP) — President Donald Trump is back in his comfort zone at the "winter White House": Mar-a-Lago, where women in furs and men in diamond jewelry and monogrammed slippers mingle with Sylvester Stallone and Fabio at New Year's Eve celebrations and Don King rubs elbows with Cabinet members, could-be ambassadors and the "MyPillow" guy at dinner.

The weight of legacy hangs heavily over "Creed II." Not just for most of the characters, who must come to grips with their own family histories. But also for the filmmakers, tasked with making a sequel to a successful spin-off of a beloved franchise. It would put any film on the ropes. Not this one. 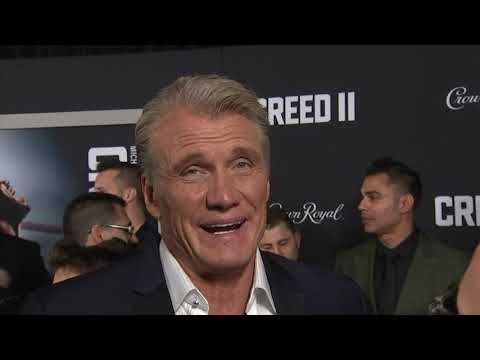 FLINT, Mich. (AP) — A police officer who was stabbed at a Michigan airport in an alleged act of terrorism told jurors Friday that he fought the urge to lie down as he bled from the neck.

Lt. Jeff Neville said that he was attacked in June 2017 with a "Rambo knife," comparing its large size to the knife used by Sylvester Stallone's John Rambo character in the 1982 movie "First Blood." He said he fell to his hands and knees at Flint's Bishop Airport.

PHILADELPHIA (AP) — Hundreds of fun-loving bicyclists spent the afternoon gearing up for a ride around Philadelphia and then took off — their clothes.

LOS ANGELES (AP) — The sons of Apollo Creed and Ivan Drago will pick up where their fathers left off more than 30 years ago.

MGM and Warner Bros. Pictures on Wednesday released the first trailer for "Creed II," the sequel to the 2015 "Rocky" spinoff.

The El Paso Times reports the "Rocky" star was seen in Deming, New Mexico, this weekend while hanging around snakes, enjoying some New York strip and smoking cigars.

NEW YORK (AP) — Days after the presidential pardon of Jack Johnson, Sylvester Stallone has announced plans for a biopic on the first African-American heavyweight champion.

Stallone said Wednesday that his newly launched Balboa Productions will start with a film about Johnson. On Thursday, Stallone stood next to President Donald Trump in the Oval Office as he signed a rare posthumous pardon to Johnson, who served 10 months in prison in what Trump called "a racially-motivated injustice."

Jack Johnson's biggest crime was being an unrepentant black man who beat up white men for a living.

High-flying and flamboyant, he refused to live by the unwritten rules of American society in the early 1900s. That made him a target, and that eventually cost him his freedom after being convicted of squiring a white woman — his girlfriend at the time — across state lines.

Trump announced Saturday on Twitter that the actor Sylvester Stallone, a friend of his, had called to bring Johnson's story to his attention.

Sylvester Stallone had passersby doing double takes and chanting "Rocky! Rocky!" on Friday as he made a surprise visit to the statue of his iconic Rocky Balboa character in Philadelphia.

The 71-year-old Stallone has played the underdog boxing champ in seven "Rocky" films since 1976 and is currently in the City of Brotherly Love making the sequel to the 2015 hit "Creed."

PHILADELPHIA (AP) — Philadelphia's first Super Bowl parade provided catharsis Thursday for hundreds of thousands of Eagles fans, deliriously joyful after decades without a title and relishing the national spotlight on a team that few outside the city thought could win it all.

Philadelphia gears up to shut down for Eagles parade

PHILADELPHIA (AP) — The city is gearing up and shutting down for its first-ever Super Bowl parade, with universities, schools and government offices all shuttering and mass transit being shifted to serve the needs of parade-going Eagles fans.

PHILADELPHIA (AP) — The war has begun in Philadelphia and Boston, where the Super Bowl-bound rivals are lightheartedly refusing to sell items from each other's cities in a sort of "cheesesteak ban heard 'round the world."

In Boston, one park has banned the sale of cheesesteaks, soft pretzels and the wearing of any Philadelphia sports paraphernalia.

City of LA settles over detective in Hollywood wiretap case

LOS ANGELES (AP) — The city of Los Angeles has approved a settlement with people whose confidential records were shared by a police detective working for a private eye who illegally wiretapped Hollywood stars.

The Los Angeles Times (http://lat.ms/2w9ijHj) reports that the City Council on Wednesday agreed to pay $285,600 to 345 people whose records were leaked by Sgt. Mark Arneson.

Save the date: Next Philly Naked Bike Ride just days away

PHILADELPHIA (AP) — The wheels are in motion for Philadelphia's next gathering of naked bicyclists.

Around 3,000 riders are expected to pass by sites including Independence Hall and the Philadelphia Museum of Art, where Sylvester Stallone ran up the steps while training as Rocky.

MANSFIELD, Ohio (AP) — A casting agency is seeking extras for a movie starring Sylvester Stallone that will be filmed at the Ohio State Reformatory, the former prison in Mansfield where "The Shawshank Redemption" was filmed.

Mansfield City Council members say the film is the sequel to the yet-to-be-released "Escape Plan 2." The "Escape Plan" movies featuring Stallone all center on a prison break.

PHILADELPHIA (AP) — The Second Bank of the United States might not be Philadelphia's top tourist draw, having to compete with neighbors like Independence Hall and the Liberty Bell, but its regal architecture is luring a whole different type of visitor: wedding photographers and soon-to-be brides and grooms.

PHILADELPHIA (AP) — Yo, tourists! The Rocky statue in Philadelphia is open again, and ready for your selfies.

The statue of the fictional boxer is located near the Philadelphia Museum of Art, where Sylvester Stallone runs up the steps while training for big fights in various "Rocky" movies.

PHILADELPHIA (AP) — Yo, tourists! The Rocky statue in Philadelphia is off-limits once again.

The statue of the fictional boxer is located near the Philadelphia Museum of Art, where Sylvester Stallone runs up the steps while training for big fights in various "Rocky" movies.

LOS ANGELES (AP) — A celebrity trainer known for getting the Kardashian clan into shape is going to work for the Los Angeles Lakers.

Gunnar Peterson is the Lakers' new director of strength and endurance training, the team announced Wednesday.

Rocky’s muse: Boxer who inspired Stallone gets his moment

BAYONNE, N.J. (AP) — Forty-two years after he stepped into the ring against Muhammad Ali as a 40-to-1 underdog, Chuck Wepner's business card still has a picture of the moment when he knocked down the champ.

For the New Jersey boxer, it gave him brief hope that he could win. For Ali, it led him to start fighting with a vengeance, eventually taking an exhausted Wepner out with 19 seconds left in the 15th and final round.