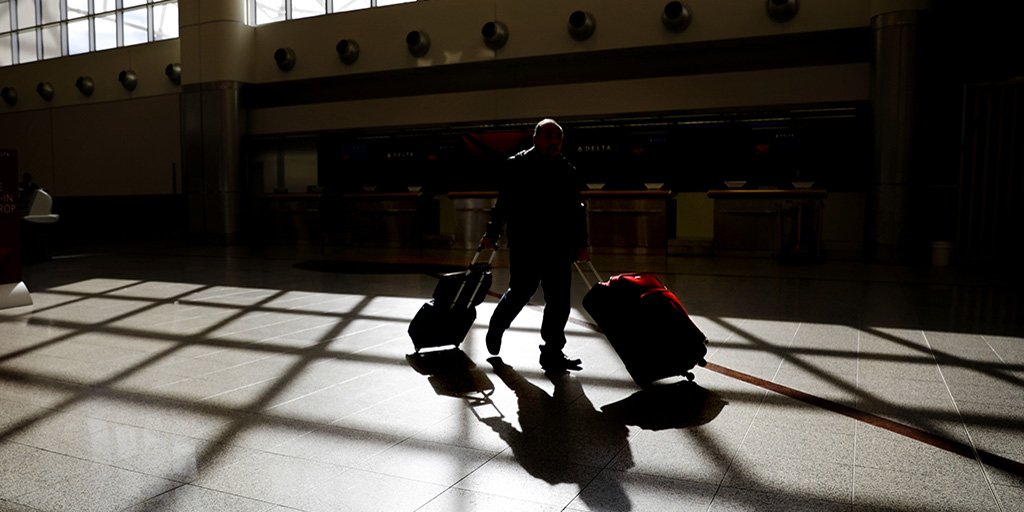 WASHINGTON (AP) — Children under 18 and people from dozens of countries with a shortage of vaccines will be exempt from new rules that will require most travelers to the United States be vaccinated against COVID-19, the Biden administration announced.

WASHINGTON (AP) — Federal health officials on Monday extended for nearly three more months its rules that cruise ships must follow to sail during the pandemic.

The U.S. Centers for Disease Control and Prevention said the extension makes only “minor modifications” to rules already in effect.

China to start vaccinating children to age 3 as cases spread

TAIPEI, Taiwan (AP) — Children as young as 3 will start receiving COVID-19 vaccines in China, where 76% of the population has been fully vaccinated and authorities are maintaining a zero-tolerance policy toward outbreaks.

KUALA LUMPUR, Malaysia (AP) — Indonesian President Joko Widodo has urged Southeast Asian countries to speed up plans to create a regional travel corridor to help revive tourism and speed up a recovery from the economic damage of the pandemic.

A campaign that began with ordinary people donating frequent-flyer miles has raised enough in two months to provide 40,000 flights for refugees from Afghanistan, and organizers and the White House are looking to nearly double that figure.

SAN FRANCISCO (AP) — Across Northern California, crews worked Monday to clear streets of toppled trees and branches and to clean gutters clogged by debris carried by rainwater from a massive storm that caused flooding and rock slides, and knocked out power to hundreds of thousands.

After California wildfire, thousands of trees to be removed

THREE RIVERS, Calif. (AP) — In the wake of California wildfires, upwards of 10,000 trees weakened by fires, drought, disease or age must be removed, work that will keep a nearby highway closed to visitors who seek the world’s two largest sequoia trees.

MILAN (AP) — Harrison Ford lost his credit card during a stay in a beach town near Palermo, Sicily, but got it back thanks to a German tourist, police in Sicily said Saturday.

The tourist found a credit card with Ford’s name emblazoned on it Thursday, and turned it in to the local police station in the beach town of Mondello.

MEXICO CITY (AP) — A San Jose, California woman born in India was one of two foreign tourists killed in the apparent crossfire of a drug-gang shootout in Mexico’s Caribbean coast resort of Tulum.

Authorities in Quintana Roo, the state where Tulum, Playa del Carmen and Cancun are located, said one of the dead women was Anjali Ryot.

KUALA LUMPUR, Malaysia (AP) — Malaysia said Friday it will reopen to foreign workers to address a labor crunch, and allow fully vaccinated tourists at the northern resort island of Langkawi next month without quarantine.

After years of ’hiding,″ Klimt work is a star in Rome show

ROME (AP) — Mystery still swirls around Gustav Klimt’s “Portrait of a Lady” nearly a quarter-century after the painting was stolen from an Italian museum, only to turn up at the start of what would become the coronavirus pandemic.

JACKSONVILLE, Fla. (AP) — The bearded maintenance worker pounded his hammer into a metal spike next to the tee as Padraig Harrington prepared to hit. He dragged a hose across the green and accidentally doused Darren Clarke before a putt.

ST. PETERSBURG, Fla. (AP) — Florida fishing guide and environmental activist Paul Fafeita says a highlight for his charter customers is spotting the manatees that forage for seagrass in shallow waters.

MOSCOW (AP) — The daily number of COVID-19 deaths in Russia hit another high Tuesday amid a surge in infections that forced the Kremlin to order most Russians to stay off work starting this week.

Sluggish vaccination rates have allowed the coronavirus to spread quickly across Eastern Europe.

Dutch court: Crimean treasures must be sent to Ukraine

AMSTERDAM (AP) — An Amsterdam appeals court ruled Tuesday that a trove of historical treasures from Crimea that have been stored for years at a Dutch museum must be given to Ukraine, saying they are “part of the cultural heritage of the Ukrainian state.”

DETROIT (AP) — Hertz announced Monday that it will buy 100,000 electric vehicles from Tesla, one of the largest purchases of battery-powered cars in history and the latest evidence of the nation's increasing commitment to EV technology.

PARIS (AP) — In a move with potential ramifications for other European museums, France is displaying 26 looted colonial-era artifacts for one last time before returning them to Benin — a decision authorities in the West African country described as “historic.”

MORGANTOWN, W.Va. (AP) — Nominations are being taken for the 2022 West Virginia Business Hall of Fame.

The Hall of Fame recognizes people with strong West Virginia ties who have made a significant impact on the business landscape, according to a news release.

Land Between the Lakes has new area supervisor

GOLDEN POND, Ky. (AP) — Land Between the Lakes National Recreation Area in Kentucky and Tennessee has a new area supervisor.

She is Leisa Cook, who has been deputy forest supervisor at the Malheur National Forest in Oregon, according to a news release from the park.

Plane from NY to LA makes emergency landing in Wisconsin

MADISON, Wis. (AP) — An American Airlines plane traveling from New York to Los Angeles was forced to make an emergency landing Sunday afternoon in Wisconsin, according to officials with the airline and the Dane County Regional Airport in Madison.

MACKINAW CITY, Mich. (AP) — Business owners on Michigan's Mackinac Island are celebrating a big rebound in tourism this year after fewer visitors made the journey to the island in 2020 due to the coronavirus pandemic.

KAMPALA, Uganda (AP) — One person was killed and seven others injured Saturday in an explosion at a restaurant in a suburb of Uganda's capital, Kampala, police said.

Police said in a statement that a bomb squad had been deployed following “a serious blast” around 9 p.m.

LISLE, Ill. (AP) — Leaders at the Morton Arboretum plan a national search for the museum's next president.

The Daily Herald reports that trustees hired a recruiting firm to lead the search for President and CEO Gerard Donnelly's successor.

BRISBANE, Australia (AP) — World No. 1-ranked Ash Barty won’t defend her season-ending WTA Finals title and is done for the year due to continuing COVID-19 travel and quarantine restrictions.

“I wanted to let everyone know that I won’t be competing in any further tournaments in 2021, including the WTA Finals in Mexico,” Barty said in a statement on Saturday.

COVID takes a bite from Bazoulé’s cult of sacred crocodiles

BAZOULÉ, Burkina Faso (RNS) — The small live chicken, offered as a lure to get the crocodile to come out of the lake, barely convinced the massive male reptile to the water’s edge. The croc, himself the lure for the sprinkling of visitors who had come 20 miles from the capital, Ouagadougou, to pose with the beings held sacred by locals, seemed disinterested in tourists and chicken alike.

BISMARCK, N.D. (AP) — North Dakota is working to extend its contract with Hollywood actor Josh Duhamel to promote tourism in his home state.

Among the least-visited states in the nation, North Dakota’s top tourism official said the 48-year-old star of several “Transformers” movies has been effective in attracting visitors to the state better known for its brutal cold weather than as a vacation destination.

DALLAS (AP) — A government watchdog said Friday that federal safety regulators routinely fail to ensure that American Airlines gets to the cause of maintenance shortcomings when they are discovered.

Russia flies home bodies of 4 tourists who died in Albania

TIRANA, Albania (AP) — The bodies of four Russian tourists who were found dead at a beach resort in western Albania last week have been flown home, the Russian Embassy in Tirana said on Friday.

Albanian police said the four — a married couple, their daughter and son-in-law — were found dead in a hotel sauna in the village of Qerret, 50 kilometers (30 miles) west of the capital Tirana, on Oct.

BUSAN, South Korea (AP) — Hee Jeong Lim shot a 6-under 66 and first-round leader Na Rin An a 69 to leave the South Korean players tied for the lead after two rounds of the LPGA Tour’s BMW Ladies Championship on Friday.

TEHRAN, Iran (AP) — Iranian hard-liners, now back at the helm of the country, may regularly rail against the poisoning of Islamic society by Western culture, but in Tehran, Iranians are flocking to the contemporary art museum to marvel at American pop artist Andy Warhol’s iconic soup cans.

CANBERRA, Australia (AP) — Qantas Airways on Friday brought forward its plans to restart international travel from Sydney as Prime Minister Scott Morrison predicted tourists would be welcomed back to Australia this year.

DALLAS (AP) — American Airlines and Southwest Airlines posted third-quarter profits thanks to federal pandemic aid – smaller Alaska Airlines turned the trick even without money from taxpayers – and they expect planes to be packed over the holidays.

Israel poised to welcome foreign tourists back to country

JERUSALEM (AP) — Israeli leaders on Thursday recommended reopening the country to fully vaccinated tourists beginning on Nov. 1, a year and a half after closing its borders to most foreign visitors due to the global coronavirus pandemic.

During instances in May and September, someone has placed swastika stickers on the building or carved the symbol associated with the Nazis into the museum door, the Juneau Empire reported.

The fire, which scorched more than 346 square miles (896 square kilometers) of the Sierra Nevada and burned hundreds of homes, reached the milestone late Wednesday, according to a report from firefighting officials.

MIAMI (AP) — South Florida's higher-speed passenger train service will resume operations Nov. 8 after being closed for 20 months because of the pandemic.

Brightline says it will resume with hourly service between Miami and West Palm Beach.

ROME (AP) — A chapel in a Rome church that is home to a Baroque sculptural masterpiece by Gian Lorenzo Bernini has been made even more dazzling after restoration.

Art and restoration specialists presented the result in the Cornaro Chapel in St.

The 76-kilometer (47-mile), five-hour ride on a regular double-decker bus around the territory is meant to appeal to people who are easily lulled asleep by long rides.

Passenger revenue soars at Southwest despite hit from virus

DALLAS (AP) — Passenger revenue almost tripled and Southwest Airlines posted a smaller loss that most had expected, despite slowing air traffic in the third quarter with the spread of the delta variant.

MADRID (AP) — Hundreds of people were evacuated during the night on the Spanish island of La Palma as a river of molten rock crept deeper into a coastal town during a protracted volcanic eruption, authorities said Thursday.

The park joins nearby Yellowstone in setting visitation records this year.

Joined by state and federal parks officials, Polis announced the 488-acre ranch near Sweetwater Lake in a northwestern county which borders Utah, will become part of the White River National Forest.

TUCSON, Ariz. (AP) — The man who died in an gunfight in Tucson with law enforcement officers this month after fatally shooting a federal agent inside an Amtrak train faced multiple criminal charges in California, two Arizona newspapers reported.

Almost all of the state is past peak conditions for fall colors, the Maine Department of Agriculture, Conservation & Forestry said Wednesday.