MURFREESBORO, Tenn. (AP) — Country stars, veterans and longtime friends talked about the faith and patriotism of Charlie Daniels at a funeral Friday for the country singer and fiddler....

NASHVILLE, Tenn. (AP) — A publicist for Amy Grant says the contemporary Christian singer had open heart surgery on Wednesday to fix a heart condition she has had since birth.

Celebrity birthdays for the week of April 12-18

By The Associated PressApril 7, 2020 GMT

Celebrity birthdays for the week of April 12-18

The Grand Ole Opry to play on in an empty theater

NASHVILLE, Tenn. (AP) — The Grand Ole Opry, the longest running radio show in history, is playing on through the coronavirus outbreak by returning to its roots.

NEW YORK (AP) — The Neptunes, the creative, innovative production-songwriting duo of Pharrell Williams and Chad Hugo who shaped pop and urban radio from the '90s well into the 2000s thanks to...

Review: Vince Gill straddles middle of the road on ‘Okie’

Musically and politically, Vince Gill straddles the middle of the road on his new album "Okie."

"We're too far left and too far right," Gill opines...

NASHVILLE, Tenn. (AP) — Vince Gill might make people break down in tears when they listen to his vulnerable new record in which he sings about regret, marriage, faith, sexual abuse and hard...

NASHVILLE, Tenn. (AP) — Country singer Luke Combs was just 6 years old when his mom and grandmother snuck him into his first concert by hiding him in the backseat of their car so he could go see...

NASHVILLE, Ind. (AP) — An indoor performing arts center is set to open this summer in a southern Indiana tourist mecca a decade after an arson fire destroyed its longtime music venue.

Eagles to perform ‘Hotel California’ album in its entirety

LAS VEGAS (AP) — The Eagles will perform their 1976 "Hotel California" album in its entirety in concert for the first time.

GUTHRIE, Okla. (AP) — Musicians and music enthusiasts are working to help a renowned fiddler and owner of a popular instrument shop after a weekend fire gutted the business in Guthrie. 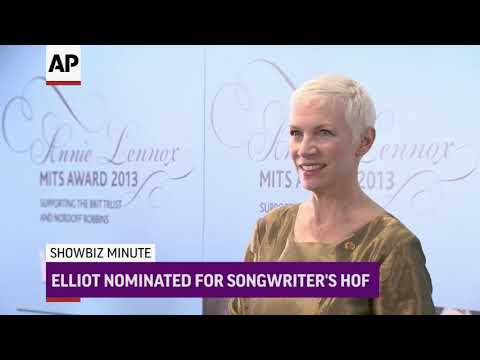 APNewsBreak: Elliott, Hynde and Gill up for Songwriters Hall

NEW YORK (AP) — Missy Elliott, one of rap's greatest voices and also a songwriter and producer who has crafted songs for Beyonce and Whitney Houston, is one of the nominees for the 2019 Songwriters Hall of Fame.

Elliott is the first female rapper nominated for the prestigious prize and could also become the third rapper to enter the organization following recent inductees Jay-Z and Jermaine Dupri.

NEW YORK (AP) — Joe and Marjorie Walsh were honored Monday night by the nonprofit Facing Addiction with NCADD for their support of the recovery movement and their efforts to raise awareness about drug and alcohol abuse.

MUSCLE SHOALS, Ala. (AP) — A new album will throw a spotlight on the famed "Muscle Shoals sound" that made a north Alabama town one of the nation's premier recording venues.

John announced on Thursday the April 6 release of two albums. "Revamp" will include covers by pop and rock stars from Mary J. Blige to Miley Cyrus. Miranda Lambert and Dolly Parton will appear on the country album "Restoration."

NEW YORK (AP) — Vince Gill defended the Recording Academy over the criticism that female artists were underrepresented at this year's Grammy Awards.

Gill said it is "impossible" to not leave someone off the list in a given year.

Parseghian remembered as much for kindness as his coaching

SOUTH BEND, Ind. (AP) — Ara Parseghian was remembered as a championship football coach, mentor, tireless fund-raiser for medical research and gentleman of the first order during his funeral Mass and a memorial celebration that followed on Sunday.

Parseghian, who brought Notre Dame's proud program out of the doldrums of the early 1960s to win two national titles, died Wednesday at 94 .

Glen Campbell’s last studio album to be released in June

The record label, Universal Music Enterprises, announced Friday that the album, "Adios," will be released on June 9. Campbell hasn't performed since 2012 and is in a long-term care facility, but his wife, Kim Campbell, said in a statement that he felt a sense of urgency after his diagnosis to record one last time.

Gill, Grant and Esperian each won a Distinguished Artist Award.

NEW YORK (AP) — Jay Z, one of contemporary music's most celebrated lyricists and entertainers, is one of the nominees for the 2017 Songwriters Hall of Fame, and if inducted he would become the first rapper to enter the prestigious music organization.

Jay Z is the first rapper to be nominated for the Songwriters Hall of Fame.

Music Review: The Time Jumpers find joy in their work

The Time Jumpers have long represented the best thing you could do in Nashville on a Monday night, but they stopped being a secret many years ago.

Still, being discovered hasn't ended the fun. Their third album, "Kid Sister," a snapshot of musicians playing songs that make them happy, proves that.