DUBAI, United Arab Emirates (AP) — A secretive Israeli nuclear facility at the center of the nation's undeclared atomic weapons program is undergoing what appears to be its biggest construction...

SEOUL, South Korea (AP) — South Korea’s president on Monday urged the incoming Biden administration to build upon the achievements and learn from the failures of President Donald Trump’s...

COLORADO SPRINGS, Colo. (AP) — The U.S. Air Force Academy installed a new superintendent who will be the first Black officer to lead the military institution.

MOSCOW (AP) — Novichok, a deadly nerve agent that has left Russian opposition politician Alexei Navalny in a coma and nearly killed a former Russian spy and his daughter in 2018, was the product...

SEOUL, South Korea (AP) — Senior South Korean and Chinese officials on Saturday reaffirmed plans to arrange a summit between their leaders “at an early date” once coronavirus concerns subside,...

SEOUL, South Korea (AP) — North Korean leader Kim Jong Un has inspected a new chicken farm being built in a county south of capital Pyongyang and called for improvements to what he described as an...

US charges North Koreans in $2.5B sanctions-busting scheme

MOSCOW (AP) — The Russian military on Tuesday told residents of a village near a navy testing range to evacuate, but cancelled the order hours later, adding to the uncertainty and confusion fueled...

MOSCOW (AP) — Thousands of people attended the funerals Monday of five Russian nuclear engineers killed by an explosion as they tested a new rocket engine, a tragedy that fueled radiation fears...

WASHINGTON (AP) — President Donald Trump said Friday that he received a "beautiful" three-page letter from Kim Jong Un and predicted that the two leaders would have more talks to try resolving the...

RICHLAND, Wash. (AP) — A new report warns that a huge facility on the Hanford Nuclear Reservation in Washington state is at risk of releasing radioactive contamination into the environment the...

BEIJING (AP) — Chinese President Xi Jinping offered encouragement for North Korea's focus on economic development in a speech in Pyongyang, turning to a topic Beijing has long pressed with its...

Xi’s NKorea visit a chance to strengthen ties, influence US

US seizes North Korean ship amid tense moment in relations

WASHINGTON (AP) — The U.S. said Thursday that it has seized a North Korean cargo ship that was used to violate international sanctions, a first-of-its kind enforcement action that comes amid a...

WASHINGTON (AP) — President Donald Trump and Russia's Vladimir Putin discussed what Trump again dismissed as the "Russian Hoax" in their first known phone call since the release of special counsel...

ROME (AP) — About 10 million people in North Korea are facing "severe food shortages" after the East Asian nation had one of the worst harvests in a decade, the United Nations' top food agencies...

ALBUQUERQUE, N.M. (AP) — It wasn't long after the atomic bomb was dropped on Japan and World War II ended that the United States began to realize it had to do something with the waste that was...

WASHINGTON (AP) — President Donald Trump said Tuesday that he wants to see North Korea eventually give up its nuclear weapons program, but adds he's not in any rush because U.S. relations with...

Trump’s ‘America first’ policy to key in on foreign shores

Trump’s ‘America first’ mantra will be prominent in address 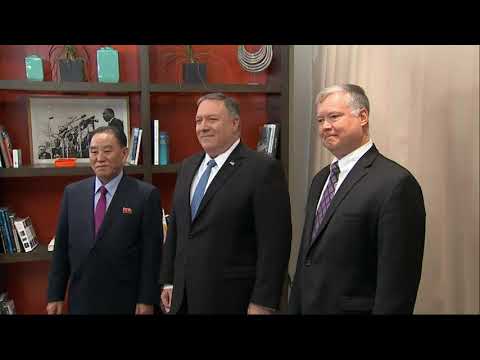 The talks in Beijing between Ri Yong Ho and Wang Yi came amid a lack of progress in international efforts to persuade North Korea to reverse its drive to build a nuclear arsenal.

Ri Yong Ho is to meet Friday with his Chinese counterpart, Wang Yi, according to China's foreign ministry.

CANBERRA, Australia (AP) — Australia and Japan on Wednesday reaffirmed their commitment to pressuring North Korea to abandon its nuclear weapons program and enforcing sanctions on Pyongyang.

US energy secretary: ‘Don’t mess with the United States’

ALBUQUERQUE, N.M. (AP) — U.S. Energy Secretary Rick Perry backed up his agency's push to ramp up production of key components for the nuclear arsenal and bolster related research, saying the nation needs to guard against threats and provide a deterrent to conflict.

"The United States is going to have a robust, modern weapons program and we'll send a clear message: Don't mess with the United States," Perry said Tuesday following a tour of Sandia National Laboratories.

WASHINGTON (AP) — Defense Department weapons programs are vulnerable to cyberattacks, and the Pentagon has been slow to protect the systems which are increasingly reliant on computer networks and software, a federal report said Tuesday.

US blacklists Turkish firm for trade with North Korea

WASHINGTON (AP) — The United States on Thursday blacklisted a Turkish company and two executives for allegedly attempting to circumvent sanctions prohibiting sales of weapons and luxury goods to North Korea.

In the year since Trump's searing, debut U.N. speech fueled fears of nuclear conflict with North Korea, the two leaders have turned from threats to flattery.

And there's fresh hope that the U.S. president's abrupt shift from coercion to negotiation can yield results in getting Kim to halt, if not abandon, his nuclear weapons program.

Prime Minister Benjamin Netanyahu's office issued a statement Sunday saying the premier looked forward to discussing ways to roll back what he described as "Iran's aggression in the region."

The Latest: Bolton says sanctions not about regime change

WASHINGTON (AP) — The Latest on the re-imposition of U.S. sanctions against Iran (all times local):

President Donald Trump's national security adviser says U.S. sanctions that kicked in against Iran Tuesday are meant to pressure the government into a broad retreat from its support for international terrorism, its military activity in the Middle East and its ballistic missile and nuclear weapons programs.

MOSCOW (AP) — Novichok, a lethal nerve agent that nearly killed a former Russian spy and his daughter in March and recently sickened another couple in England, was the product of a highly secretive Soviet chemical weapons program. Here are key highlights of the program and the agent.

WHEN WAS NOVICHOK DESIGNED?

UNITED NATIONS (AP) — Syria is still failing to answer questions about its chemical weapons program, years after becoming a party to the chemical weapons convention, members of the U.N. Security Council said Wednesday.

WASHINGTON (AP) — A majority of Americans now approve of President Donald Trump's handling of U.S. relations with North Korea, a change that comes after his historic summit with that country's leader, Kim Jong Un. But most don't believe Kim is serious about addressing the international concerns about his country's nuclear weapons program.

US: No sanctions relief before North Korea denuclearizes

BEIJING (AP) — The United States will not ease sanctions against North Korea until it denuclearizes, Secretary of State Mike Pompeo said Thursday, as he reassured key Asian allies that President Donald Trump had not backed down on Pyongyang's weapons program.

WASHINGTON (AP) — President Donald Trump warned Iran on Wednesday against resuming its nuclear weapons program, a day after announcing that he was withdrawing the U.S. from the landmark Iran nuclear deal.

"I would advise Iran not to start their nuclear program," Trump told reporters at the start of a Cabinet meeting when asked about the potential consequences. "I would advise them very strongly. If they do there will be very severe consequence."

BEIJING (AP) — The Latest on a visit by North Korean leader Kim Jong Un to China (all times local):

Japan's prime minister has reiterated that any talks with North Korea must end its nuclear weapons program, following an unexpected meeting this week between the leaders of North Korea and China.

Prime Minister Shinzo Abe told a parliamentary committee Wednesday that Japan has great interest in what happened and hopes to receive an explanation from China.

SEOUL, South Korea (AP) — After North Korea's first test-firing of an intercontinental ballistic missile last week, the country's leader, Kim Jong Un, has moved one step closer to perfecting a nuclear missile capable of reaching the United States, a weapons program launched by his grandfather and nurtured by his father.