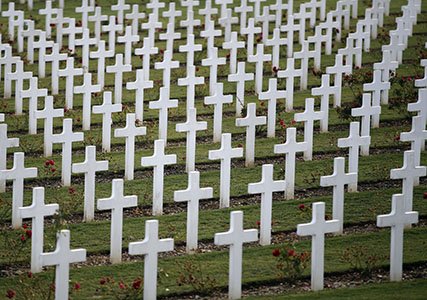 It was called "The war to end all wars," but World War I ushered in revolutions, tyrannical regimes, and an even bloodier global conflict two decades later. The Associated Press marks 100 years since the signing of the armistice.
Click to copy

CAMP SHELBY, Miss. (AP) — Visitors to the Mississippi Armed Forces Museum at Camp Shelby will get to experience some major updates to the museum's World War I exhibit as well as some other...

A year before COVID-19 began its global rampage, Penn State Altoona history professor John Eicher embarked on a one-of-a-kind study delving into the pandemic of a...

BEIRUT (AP) — The Islamic State group claimed responsibility on Thursday for the explosion the previous day at a cemetery in Saudi Arabia, saying it primarily targeted French diplomats attending...

An explosion at a Saudi cemetery where American and European officials were commemorating the end of World War I wounded three people Wednesday, according to official statements.

Virus makes for one of Europe’s loneliest WWI remembrances

YPRES, Belgium (AP) — When a dawn fog lifted over countless World War I battlefields, cemeteries and monuments in Belgium and France Wednesday, the pandemic ensured that the remembrance of the...

Centennial of Harding’s election quieter due to pandemic

COLUMBUS, Ohio (AP) — The centennial of President Warren G. Harding's election was marked Monday in his home county in Ohio with a modest radio tribute rather than the grand museum and homestead...

Planning for Olympics in a pandemic has echoes of 1920 Games

DÜSSELDORF, Germany (AP) — Olympic athletes competing for gold medals in a world reeling from a pandemic? It won't be the first time.

A century before the Tokyo Games were postponed because...

Memorial to WWI veteran may soon be moved

WORCESTER, Mass. (AP) — A memorial to a Worcester teenager killed in action during World War I may soon be moved to another site in the city because it has become a hangout spot for...

ALLENTOWN, Pa. (AP) — Apart from historians, no one thinks much about Camp Crane anymore. The World War I military training ground at the Allentown Fairgrounds served its purpose and disappeared...

WASHINGTON (AP) — A flu pandemic was ravaging the world, killing indiscriminately in almost every country, including more than 600,000 deaths in the United States. The states were in a panic, but...

Presidents in health crises: Trump more hands-on than many

WASHINGTON (AP) — Woodrow Wilson was more focused on the end of World War I than a flu virus that was making its way around the globe, ultimately sickening hundreds of thousands of Americans,...

BERLIN (AP) — He led Germany's army in World War I and served for nearly a decade as the country's president, but thanks to his role in Nazi dictator Adolf Hitler's rise to power, Paul von...

WOOD-TV reports the angler found the explosive Tuesday after dangling...

Queen, politicians out in force as UK remembers its war dead

LONDON (AP) — Queen Elizabeth II joined Britons in remembering their war dead, as the country's political leaders paused campaigning for the Dec. 12 election to take part in a somber Remembrance...

STAMFORD, Conn. (AP) — People across Connecticut will be gathering for parades and ceremonies to honor those who have served their country in the military.

LAFAYETTE, Ind. (AP) — A black soldier who was buried in an unmarked Indiana grave is getting proper recognition for his military service in World War I nearly a half-century after his...

From parade to pandemic: Museum looks at 1918′s deadly flu

PHILADELPHIA (AP) — On Sept. 28, 1918, in the waning days of World War I, over 200,000 people gathered along Broad Street in Philadelphia for a parade meant to raise funds for the war effort....

WARREN, Conn. (AP) — A Connecticut committee has unveiled a memorial to commemorate all town residents who served in World War I, the Korean War, the Vietnam War, conflicts in Lebanon and Grenada,...

W.Va. veteran among those honored on WWI shipwreck plaque

CHARLESTON, W.Va. (AP) — A West Virginia sailor and veteran is among those honored on a recently dedicated World War I memorial in New York City's Times Square.

Morrow was given the Pritzker Military Museum & Library...

WASHINGTON (AP) — A 40-foot-tall, World War I memorial cross can continue to stand on public land in Maryland, the Supreme Court ruled Thursday in an important decision about the use of religious...

KANSAS CITY, Mo. (AP) — Officials say vandals have spray painted apparent references to a Peru prison massacre on a wall at the National World War I Museum in Kansas City.

LOS ANGELES (AP) — United Airlines and the University of Southern California have reached a new naming rights agreement for Los Angeles Memorial Coliseum to resolve criticism that placing a...

COLLEVILLE-SUR-MER, France (AP) — Side by side the presidential sons lie, separated by two world wars, united in their fervor for the freedom of France.

KANSAS CITY, Mo. (AP) — The National World War I Museum and Memorial in Kansas City is offering a range of events for this Memorial Day weekend.

JACKSON, Miss. (AP) — The Mississippi Capitol is losing its cannons.

The two World War I cannons have stood for decades on the south side of the building. On Thursday, they were permanently...

GREEENWOOD, S.C. (AP) — Despite years of legal wrangling, the question of jail time and even anonymous "Unabomber letters" sent in the aftermath, three of the men behind a Heritage Act-defying...

ANKARA, Turkey (AP) — Turkey's president has sparked an acute diplomatic spat with far-off New Zealand and Australia, referring to a key World War I campaign and the more recent Christchurch...

The tragedy of the Gallipoli campaign in World War I is etched deep into the identities of Australia and New Zealand, as well as Turkey.

More than a century on from the carnage that saw...

Heiress’ $900 donation led to a BMA exhibit of Picasso, Dali

BALTIMORE (AP) — A gesture as simple as writing a check can have heroic consequences.

The $900 that the Baltimore heiress and art patron Saidie Adler May filled out represents a modest sum,...

Employees reported a suspicious object encased in mud at the facility in Tseung Kwan O district in the New Territories, according to the Sing Tao Daily newspaper and other outlets.

A bomb squad concluded the 1-kilogram (2.2-pound) object was a hand grenade, possibly made in Germany.

KANSAS CITY, Mo. (AP) — A new exhibit at a Kansas City museum documents the destruction during World War I captured in a series of jarring and sometimes unidentifiable photographs and illustrations.

Local historian walks in ‘footsteps’ of his grandfather

JOPLIN, Mo. (AP) — When the whistles sounded, James Gregg Kelly went "over the top," and from his trench charged across a desolate wasteland scarred by craters, tangles of barbed wire, and dead and dying men.

BUCHAREST, Romania (AP) — Despite freezing temperatures, tens of thousands of Romanians turned out Saturday to celebrate 100 years since their nation became a modern-day state, with some noting concerns now about the rule of law and the state of democracy in the Balkan nation.

JOHANNESBURG (AP) — Amid the fanfare marking the 100th anniversary of the end of World War I, little has been said about crucial participants in the conflict: Africans.

More than 1 million African soldiers, laborers and porters were vital actors in the war in Europe and especially in battles on the African continent, yet little commemorates their role.

This is slowly changing as historians and artists highlight contributions made by Africans in the war from 1914 to 1918.

CHAMBERSBURG, Pa. (AP) — The War to End All Wars ended a century ago.

The brash Americans through sheer numbers and individual heroics ended the stalemate of World War I trench warfare in western Europe.

"We got there in the nick of time to stave off the attack," said retired Col. Doug Mastriano, a retired military historian living in Fayetteville. "Even British historians will admit the war could not have been won without the Americans."